WATCH: Distruction Boyz' Omunye gets a shout-out in parliament 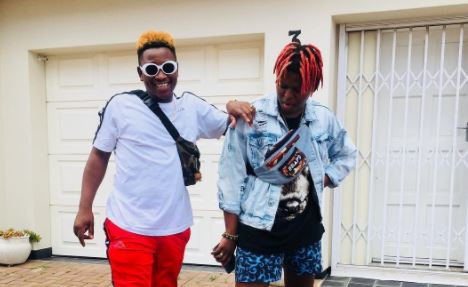 Gqom group Distruction Boyz are over the moon after their hit single Omunye was mention in parliament this week, to fits of laughter from politicians and the gallery.

While parliament proceeding can sometimes be entertaining, the situation became lit for a quick second on Tuesday when EFF spokesperson Mbuyiseni Ndlozi sang part of the songs' chorus. He was responding to  an exchange where one MP said "Ke tlo mo fologa", which loosely translates to "I'll get off", only for another MP to ask: "Does this mean you were on top?".

A video of the exchange was shared on social media.

Speaking to TshisaLIVE, Distruction Boy said they were honoured to have the song be universal enough to get a mention in one of the highest institutions in the country.

"This just confirms that the emotions we express in our music - touch people's lives. For us this means everything and it's every artist's dream. It is testimony that the song makes people happy and finishes any doubts about the song spreading a negative message. Thank you South African parliament," they said.

Dr Tumi opens up about money struggles and 'being broke'

Dr Tumi has challenged the traditional stereotypes of doctors being wealthy, revealing that his own idea to start a medical practice left him broke ...
TshisaLIVE
4 years ago

Generations: The Legacy actress and reality star Manaka Ranaka has been in the industry long enough to pick her battles, and is ready to take on ...
TshisaLIVE
4 years ago

Weeks after being found "dazed and almost naked" in a stranger's garden, Maskandi artist Sthembiso "Mroza" Fakude has reflected on the "unbearable" ...
TshisaLIVE
4 years ago