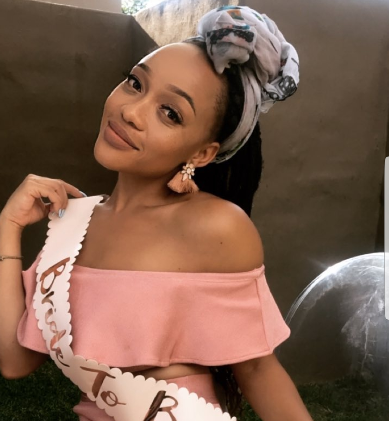 Radio personality and actress Thando Thabethe is counting down the days until she walks down the aisle and recently had a celebration where she asked her besties to be her bridesmaids.

All of the star's day ones were there, including 947 radio host Mantsoe Pout, who was asked to be a bridesmaid.

Thando stunned guests at the fancy affair with a simple pink dress and headwrap and treated her bridesmaids to a massive lunch and impromptu photoshoot.

There was even an after-party with the star's close friends and family breaking it down on the makeshift dance floor.

Thando and her beau Frans Mashao announced their engagement in July after more than four years together.

Thando told Bona magazine the pair met on a yacht at a media event four years ago after Frans made fun of her toes. She said she found him funny, they exchanged numbers and the rest was history.

“I gave him my number and we met up in Johannesburg and have been together ever since."

Take a look at some of the snaps from the day.

Somehow I feel this wedding is gonna be a PARTY!!! I have the best bridal team eveeeer....💍💍💍🤵🏽👰🏽 #ThabootyMashao

Celebrities are among some of the most trolled people on social media, and while many of them just ignore their critics, some are clearly not to be ...
TshisaLIVE
4 years ago

The year Pulane claimed her throne back

Socialite Pulane Lenkoe has been through most, but has managed to keep her head held high and to use her experience to inspire others.
TshisaLIVE
4 years ago

There's nothing cuter than when a couple stands together to support each other or share their love for one another loud enough for the whole world to ...
TshisaLIVE
4 years ago

From meat dresses to being a bee, Skolopad's style left y'all shocked

First she appeared on the Metro FM red carpet wearing a yellow dress that catapulted her to internet stardom.
TshisaLIVE
4 years ago

'Robbie's death was a shock to everyone' - Family friend

Despite his health suffering greatly after being diagnosed with anaemia over a year ago, Robbie Malinga's family and friends have been left shocked ...
TshisaLIVE
4 years ago