Heavy K is happy with his weight & his hits! 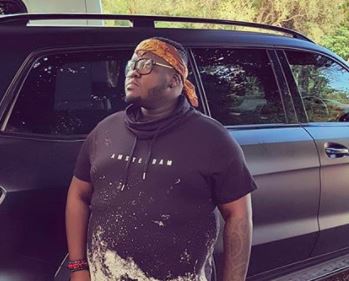 Heavy K is only here to serve hits not attend to social media trolls.
Image: Via Instagram

Music producer Heavy K is too busy producing chart-topping hits and has no time to entertain nasty body-shaming insults about his weight.

Speaking to TshisaLIVE the hitmaker explained that he was content with himself and would only do something about his weight when it suits him, not because of pressure.

"I won't lie at times they (the tweets) do get to me, but that is probably only 2% of the time. When I see nasty comments about me or my weight, which I do, I just ignore it. The thing is that is how they feel about my weight or about me, but it's not how I feel about myself. I'm happy the way I am. I'm not here for that, mine is to make great music."

Heavy K, real name Mkhululi Siqula, said that even though he was a "soft" child, after becoming famous he realised that not everyone would have something nice to say about him.

He said perhaps haters had to redirect their hate to other aspects of his life because they couldn't fault his music. Heavy K added that when he eventually decides to work out, he would document it so it would inspire others like him.

The Inde hitmaker is responsible for some of the biggest songs in Mzansi, such as Umoya, Celebration, Yini and many more.

"To be honest, I consider myself special, this is my calling. That is why I am humble, I quickly got over the 'fame' that accompanied my success. I told myself, 'my money must make a difference in my life but it must never change me.' God gave me a talent and the ability to understand what I must do with it and I'm blessed that I know what makes a hit song."

Heavy K said he doesn't succumb to the pressure of "releasing hits," rather he just gives every song the necessary attention it requires.

"When I go to the studio, I give it my all. I know I am special because over the years, my brand has become associated with hits. When I make songs, people already expect a hit song with a message. It means a lot to me that I don't have to create 'bubblegum' or music that is too commercial to be celebrated. I'm very humbled by the the love that my songs have received."

His new album, titled Respect the Drumboss 2018, is set to be released later this year. Both Inde (featuring Bucie and Nokwazi) and his latest single Sphum’ elokshini  featuring celebrated Durban vocalist Mondli Ngcobo will be on that album.

Mandoza's widow on unreleased music: 'His soul is coming back for more'

Those close to Mandoza will commemorate what would have been his 40th birthday on January 17, by releasing some of his music that has never been ...
TshisaLIVE
3 years ago

Dineo Ranaka made a return to reality TV this week with a new series aimed at uncovering long-lost secrets to inspire normal South Africans to live ...
TshisaLIVE
3 years ago

In a matter of minutes musician, Oshri Elmorich went from being an “unrecognised artist” to bagging a record deal with US singer Akon’s ...
TshisaLIVE
3 years ago

Mzansi's favourite polygamist family is returning to the small screens on Thursday night and from what businessman Musa Mseleku has told TshisaLIVE, ...
TshisaLIVE
3 years ago

Lebohang Khitsane, CEO of Bataung Memorials has revealed to TshisaLIVE that the redesign of Robbie Malinga's 7-ton 'tombstone statue' was already ...
TshisaLIVE
3 years ago