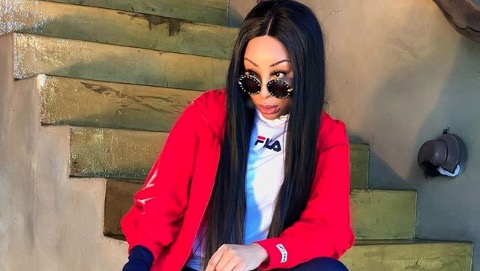 Khanyi Mbau has made a few sacrifices for the love of acting.
Image: Via Instagram

Tebogo Lerole is one of Khanyi Mbau's biggest fans and cheerleaders, who isn't shy to sing his girl's praises.

As Khanyi and the rest of the Abomama cast celebrated the wrap of a lit season 1, she reflected on some of the sacrifices actors make so that the show can go on.

She shared a video of an incident when she hurt a leg during filming, but had to brave the pain and continue shooting.

Commenting on the post, Tebogo said that he could testify to Khanyi's passion for acting.

"I can testify ✊🏾I know how dedicated and passionate you are when it comes to your craft."

Thula says he's put the legal battles behind him.
TshisaLIVE
4 years ago

Mariechan has decided to re-introduce herself to Mzansi and the world.
TshisaLIVE
4 years ago

Musa Mseleku: Polygamy is for the family, not to cure weaknesses

The reality show star says that too many men are doing it wrong.
TshisaLIVE
4 years ago

"I am personally asking that police help justice prevail. It needs to come through."
TshisaLIVE
4 years ago