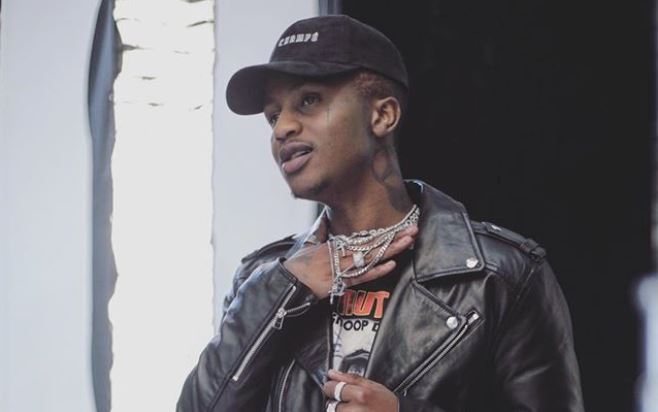 Emtee says he was told to stop getting high.
Image: Via Emtee's Instagram

Emtee isn't the type to sweep his fall under the carpet. Instead, he's used it in a new single and music video, talking openly about the lessons he's learnt over the last few weeks while reflecting on his past.

Emtee recently returned to the spotlight after a near month-long recovery break in Bloemfontein. He went to ground after a video of him "collapsing" on stage during a performance went viral.

While the fiasco led to calls for the rapper to get professional help amidst alcohol and drug abuse allegations, Emtee decided to use footage of the incident in his latest music video.

The video opens with Emtee staggering on stage before falling. He is next shown regaining consciousness as he falls into an empty space.

"Who is that boy who was dissed a while back, who almost broke but bounced back," he rapped before saying his dad was proud of him.

He talked about the formation of ATM crew and how they had become one of the most talked about acts in the country.

Talking about his habit of smoking weed, he claimed police had come around to look for drugs in his place and that he was told to stop.

"Ralph told me to stop. I was getting high. He told me soon I would pop, you only get one shot."

Check out the video below.

Emtee: It was my mistake to be so open about what I do, I was played

Rapper says he blacked out from the fall.
TshisaLIVE
3 years ago

Emtee: People who hate me, don’t know me

But some fans are out here calling BS.
TshisaLIVE
3 years ago