Wait what? Soulja Boy breaks the net with his 'I made Drake’ comments 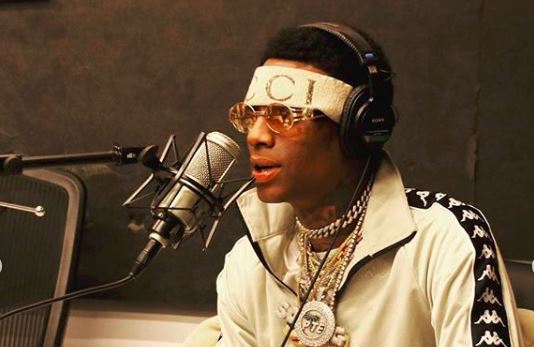 Soulja Boy went in on Drake for "stealing" his flow.
Image: Instagram/Soulja Boy

Soulja Boy appeared on Power 105.1's The Breakfast Club where he was asked about a few familiar faces in the music community including Kanye West, Tyga and Drake. And his comments caught fire on the net.

When radio hosts Charlamagne Tha God and crew insisted Drake was the "biggest rapper in the world," Soulja Boy got up from his seat and made it clear he that he didn’t share that view.

"You n***as better stop playing with me. Stop telling me like I ain't teach Drake everything he know."

While Twitter was shocked that he could come for Drake like that, Soulja Boy insisted that he apparently made Drake and that in "fact" the Kiki hitmaker  "stole" his whole flow from him.

Soulja Boy (Big Draco) goes off on The Breakfast Club, says he taught Drake everything he knows. pic.twitter.com/AWQEaOwqkg

If you didn't sing these lyrics out loud... then you probably weren't part of the squad that owned Samsung E250s and learnt all the moves of Crank That - Soulja Boy moves.

That's fine, but that should also tell you that the guy was a real big deal in the mid 2000s.

Before we had Drake, we had Soulja but then he kinda disappeared and the very same people he claims to have "made" flourished.

Although most tweeps could agree that Soulja made some solid points, they still dragged him, for the sake of it!

According to Soulja Boy 😂 pic.twitter.com/eWsiODKmcW

Drake all smiles as he unveils new look amidst controversial statements from Soulja Boy. pic.twitter.com/LYV8pODtAb

But we all agree with this guy that the way Soulja Boy said "DRAAAAAAAAAKE? DRAKE!" will forever be a great meme!

The star spoke to TshisaLIVE about his new role and THOSE rumours which followed him.
TshisaLIVE
3 years ago

Riky responds to why Cassper's not on the #CottonFest lineup

Relax, fam. It's not that deep and there is no beef.
TshisaLIVE
3 years ago

Skolopad was left dissappointed by the comment.
TshisaLIVE
3 years ago