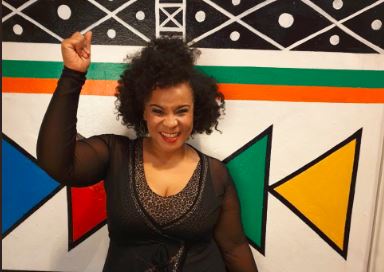 Lebo Mashile is working on a play about Sara Baartman.
Image: Instagram/Lebo Mashile

The ongoing slander and criticism towards Caster Semenya has reminded South African creatives of the similar treatment that was given to Sara "Saartjie" Baartman. One of them was poet Lebo Mashile who revealed that she's working on a play in Sara's honour.

Taking to her Twitter page, as part of the conversations that were ignited by Caster Semenya's case against the IAAF about her testosterone levels, the actress-cum-scriptwriter explained why it was important for Africans to stand up and defend Caster.

"Sara Baartman. They took her from Africa, made a mockery of her buttocks. She became a white person's show, centuries later the very same white people are in surgery to look like her. History will not forgive Africa if we allow them to turn Caster's God's design into a mockery."

Lebo explained that it was important for black women to look at how the world saw them through Sara's eyes and said it was a huge part of the reason she was working on the play.

"I’ve been working on a piece about the life of Saartjie Baartman for the past 3 years. It will be on at the Market Theatre in September. It’s called Venus vs. Modernity. Saartjie’s life is the lens through which every single black woman must pass to understand how we are seen."

She gave more details about how far the project was and how they were moulding it to share Sara's life brilliantly.

But now it has evolved into something completely different. It’s my baby. I am so proud of it. @Pamelanomvete is the 1st director & @KPutuma is the 2nd director. The next staging of it is being produced by the Windybrow Theatre, but it will be on at the Market Theatre.

Tweeps were excited at the prospect of the theatre play and also got to talking about how great it would be to have the icon honoured with a narrative that gives her the dignity she deserves!

Remember #SarahBaartman paraded under the name #HottentotVenus
She lived and died with no dignity. Even in death she was accorded no dignity. #RememberHer pic.twitter.com/Xpc3GMRS8Q

We are not here for you to discuss our bodies as sexual beings or to be hypersexualized or as science experiments for your understanding like Sara Baartman from South Africa. pic.twitter.com/dBKwwWmN14

IN MEMES | There was a whole 'hitman' on Rea Tsotella & it was tense!

The audience was on their best behaviour!
TshisaLIVE
3 years ago

The Met Gala is fashion's favourite night of the year for some and the night you'd sooner forget for others. Here's who slayed and who dismayed on ...
Lifestyle
3 years ago