Cassper and Riky reunion? They share a picture together but Cassper shuts down collab suggestions 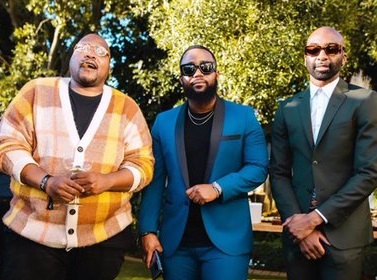 Stogie T, Cassper Nyovest and Riky Rick have - in different combinations - had public disagreements in the past.
Image: Instagram/Stogie T via everyday people stories

Cassper Nyovest has come out to quickly flip the switch and set the record straight about his "friendship" with Riky Rick after a picture of them emerged from DJ Black Coffee's opulent birthday luncheon, and  got his fans excited.

It all started when Major League DJs tweeted a photo, with a very vague caption, in which frenemies Cassper and Riky featured.

It wasn't just the DJs who implied the pair could have buried the hatchet. OG rapper Stogie T shared a similar caption and picture he took with Cassper and Riky.

Plus, if your memory is sharp, you will  remember that Cassper once spazzed out at Stogie T at the SA Hip Hop awards.

"There is a really nice story about how this picture happened but (shush). So I am going to let y’all have fun in the comments. Shout out the homies Cassper and Riky," he said.

You'd be forgiven to think a global pandemic like Covid-19 would be a catalyst in making people realise that life is fragile, or that people may opt to bury the hatchet.  At least that is what fans of rappers and used-to-be besties Cassper and Riky Rick thought.

However, Cassper didn't waste time in setting them straight.

Cass took to Twitter to asked the twins to dial down the vague tweeting before they got tweeps excited for zilch.

"It's just a picture boyz... Don't get the world excited for nothing. Please!" Cassper tweeted.

It's just a picture Boyz. Don't get the world excited for nothing. PLEASE! https://t.co/sGjiui1biZ

Cassper and Riky had an interesting bromance for a while - which both their fan bases love. Then last year Mzansi caught wind of the news that Cassper and his former bestie Riky Rick had seemingly fallen out.

At the time, both Riky and Cassper clarified their relationship - or lack thereof - but stressed there was no beef between them.

"He did say we weren’t real friends. I was a bit confused but you’re right. It is what it is, I guess. No beef. Just ain't talking. That happens. Let’s not blow it up into beef. I don’t wanna beef with nobody. Especially people who were close friends. Don’t have that type of energy," Cassper said at the time.

Fans are still reeling in shock at the revelation that Cassper and his former bestie Riky Rick have seemingly fallen out and are not real friends ...
TshisaLIVE
2 years ago

It's that time of the year again, when rappers catch feelings
TshisaLIVE
1 year ago

Riky responds to why Cassper's not on the #CottonFest lineup

Relax, fam. It's not that deep and there is no beef.
TshisaLIVE
2 years ago

That #HottestMC list left your faves & their fans in their feels, here's why

Here's what AKA, Cassper Nyovest, Kwesta and others had to say about the #HottestMCs list
TshisaLIVE
2 years ago