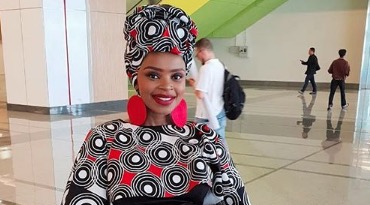 After a two-month social media sabbatical Zoleka Mandela has broken her silence on the death of her mother Zindzi Mandela, opening up about the grieving process.

Zindzi died at a Johannesburg hospital on July 13. The cause of death has not been disclosed, even though her family confirmed that she tested positive for Covid-19.

Her daughter Zoleka, who has previously opened up about her turbulent relationship with Zindzi in her memoir When Hope Whispers, took to Instagram to share that the last time she spoke to her mother was 11 months ago.

Zoleka revealed that she had gone nine months without talking to her mother before she died and went on to imply that she regretted that decision deeply.

Playing to the soft harmony of US singer-songwriter Dobie Gray's Loving Arms, pictures of moments gone by between Zoleka and Zindzi played over a two-and-a-half minute photo slide show.

On Twitter, Zoleka posted snaps of her with Zindzi and her grandmother Winnie, added that “heaven must be beautiful right now ...”

Friends, including Pearl Thusi and Criselda Kananda, and fans took to the comments sections of her post to spread love and light.

“Wow babe. As a country we were so preoccupied that we couldn’t really take a moment to celebrate her life and mourn with you properly. Uxolo. Dudu,” Pearl said.

“Sis, I know no greater pain. I’m with you in spirit. I love you and I’m here for you,” Lerato “Zah” Moloi, who recently lost her mother to cancer, added.

Zindzi Mandela will be remembered as many things, a fearless fighter, a sensitive soul and a heroine
News
1 year ago

Zoleka Mandela 'starts again' in new home: Here’s to a place I can finally call home

“Here’s to having strength to start over again, even at the age of 40. Here’s to having courage not to allow failure to hold me back, even when it’s ...
TshisaLIVE
1 year ago

Zoleka Mandela's daughter Zenani would have been 23 years old.
TshisaLIVE
1 year ago