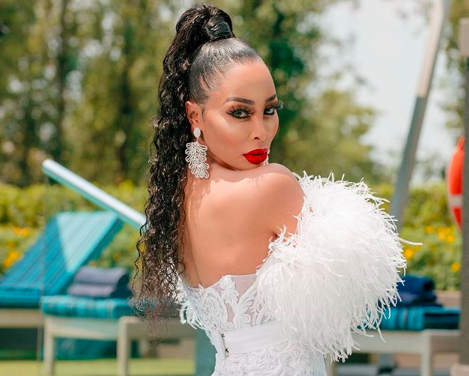 Khanyi Mbau is being praised for being true to herself.
Image: Khanyi Mbau via Instagram.

Media personality Khanyi Mbau,  who has captivated Mzansi for more than a decade, has lifted the lid on events in her life which have led her to being the strong-willed person she is.

In an interview with Pearl Thusi on Behind The Story on BET, Khanyi spoke about her childhood, daddy issues, motherhood, break-ups and how she was the original “slay queen”.

With the episode shot before her father's passing last month, Khanyi shared that she was content with the relationship she had with him, as he was too hard to get hold of based on his busy business life.

“My relationship with my father ... is non-existent but I do check on him through my siblings, which is my sister. Reason being, I'm saving my peace, I'm protecting my atmosphere and I'm trying to keep the same temperature, because my dad is one man who's never happy about anything.”

Khanyi went on to detail her relationship with money and how she was taught from a young age to become a successful person.

The former “Queen of Bling” revealed how she had been depressed for 15 years and her most regrettable decision was hurting some of her industry mates.

“The first step to healing and conquering your depression is to truly accept but sometimes, you need to fall to get up because depression is that you're living in that anxiety, that, 'No, I am that boss, but tomorrow what are they going to ask, where is that boss?' Let it go babe, let it fall ... we going to laugh for two weeks ... but it all ends, you're comeback will always say you're strong."

Khanyi revealed how Pearl got the Real Goboza gig and she didn't, due to her ex leaking nude photographs of her.

Wednesday night's episode got many tongues wagging. Here's what some of them had to say on social media:

Man Khanyi Mbau is so self aware and so eloquent....I aspire to have that much emotional intelligence. #BehindTheStoryBET

Earlier this year, Khanyi made a comeback to the music scene when she dropped her steamy music video which features now ex-boyfriend Tebogo Lerole as her music video model.

Speaking on why she decided to go with her man in the vid, Khanyi told TshisaLIVE that she included Tebogo because most guys would freeze up when they shoot with her.

Khanyi Mbau hits back at 'they take all the gigs' claims: 'This is not preschool love, it’s the jungle'

"In any industry it’s about mastery! Some will serve and some will be served!"
TshisaLIVE
1 year ago