'She understood the assignment!' — Enhle Mbali wows Mzansi in 'Rockville' 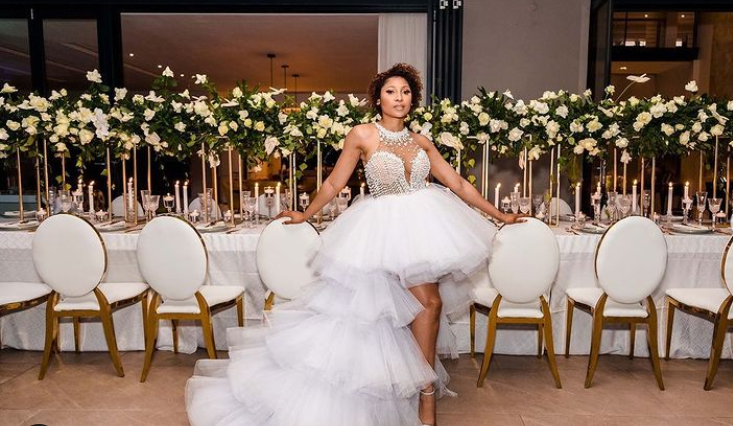 Actress Enhle Mbali Mlotshwa has been cementing her name as one of the South African thespians who always delivers and the latest episode of Mzansi Magic's Rockville has confirmed that she came to serve and not play as Lindi.

The actress landed on the Twitter trends list on Sunday night after her stellar performance on the latest episode of the Ferguson Films' production left the country impressed.

Playing the role of Lindi — who is going through turmoil in her relationship with JB and on the business side of things — Enhle gave a performance that had viewers glued to their seats. In one emotionally-charged scene, Lindi questions JB about infidelity and when she broke down and cried after showing him the door, fans couldn't help but shed a tear with her.

Enhle felt the love on the TL and also used the opportunity to thank Ferguson Films for giving her a role whose story is worth telling.

“Shona and Connie Ferguson, thank you so much for this season, I have been asking for a performance-rich script and you kept your promise. It was so much fun playing Lindi this season. I love you both so much. From my soul,” wrote Enhle.

Her boss on the production and fellow actress Connie Ferguson — who plays Mavis in the story — also took to Twitter to give Enhle her flowers.

“You understood the assignment and nailed every page! Bravo my angel! This is only the beginning for you,” Connie said.

You understood the assignment and nailed every page!👌🏾 Bravo my angel!👏🏾👏🏾👏🏾 This is only the beginning for you!🙌🏾🙏🏾❤️ #RockVille5 https://t.co/FwgbAAeZMT

Meanwhile, there was nothing but praise and applause for Enhle on the TL.

Enhle Mbali is really nailing this Lindi role 🙌🏾. She killed this scene & did it so convincingly 🔥🔥🔥 #RockVille5 pic.twitter.com/EPqMLTEcqm

#RockVille5 Lindi owned this season she delivered each and every scene her storyline incredibly interesting and kept me hooked on the show 🔥🔥🔥🔥🔥🙌🏼 Enhle Mbali deserves appreciation for this pic.twitter.com/VLlh32kUVx

She deserves an #SAFTAs she doing the Lord work with this acting thing Enhle Mbali @EssieApparel_ #RockVille5 pic.twitter.com/qjrsAI7WQV

Speaking outside court on Monday Enhle vowed to fight for herself, saying the "time is now"
TshisaLIVE
1 year ago

"We shouldn't at this stage still have to ask people to put their masks on," said Gail.
TshisaLIVE
11 months ago

Who can blame Connie for being this smitten? Her King Ro is the cutest!
TshisaLIVE
1 year ago

"As black people, we never hold each other accountable, it has become so easy for us to blame someone for something."
TshisaLIVE
11 months ago