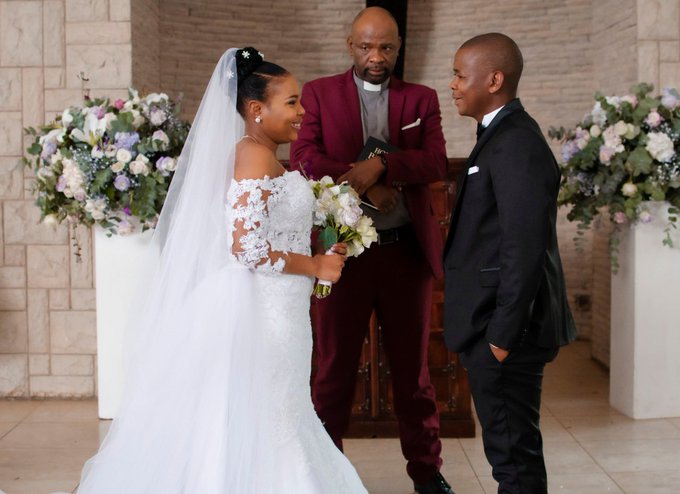 Skeem Saam fans all over SA were left in their feels last night as they watched day-one characters of the SABC1 soapie, Thabo and Mapitsi, get married after having endured a lot since the first day Mzansi met the pair.

Mapitsi and Thabo, played by Mogau Motlhatswi and Cornet Mamabolo respectively, are two of the original cast members of the much-loved soapie.

In the story, the pair started dating as teen at Turf High, went through the typical teenage rollercoaster love and plunged even deeper into trials and tribulations when Thabo impregnated Mapitsi. Even after they had their son, Pitsi, the cracks in their relationship eventually became big enough to break them and, for a while, they moved on and dated other people.

However, as they grew up and found themselves as individuals, the pair were pulled back to each other. Having endured family drama on steroids, a “problematic” mother-in-law, bridesmaids and groomsmen drama, Thabo and Mapitsi finally made it to the altar.

Everything about the joy of the event and the emotions shared as they exchanged vows, left viewers in their feels. That SA literally watched both Thabo and Mapitsi grow up in front of them made them feel like VIP guests at the wedding.

Tweeps flooded the TL with memes to mark the occasion.

Check the tweets out below:

#SkeemSaam
We've watched Skeem Saam from when they were still in high-school ..to teenage pregnancy and today siya shadisa #TboseWedsMapitsi ❤🥺😹haibo we are proud viewers pic.twitter.com/rddC98Dd8r

#SkeemSaam is serving wedding goals... They look so beautiful 🥰🥰 pic.twitter.com/2mB1I1gESk

#SkeemSaam is serving content I signed up for. 😭❤️ pic.twitter.com/eJVrQ3tmEp

Whoever is behind music background kere cheers mfanaka #skeemsaam pic.twitter.com/xmEibxt8ks

The writers of #SkeemSaam 😭😭🙌🙌 pic.twitter.com/YqRKLhEHvd

Skeem Saam remains undefeated this season guys 😭😭😭😹😹😹after the wedding they will hit us with Pretty's pregnancy🤰🤰🤰 drama #SkeemSaam pic.twitter.com/86wYE5uIxm

“Tomorrow I won't be afraid to admit when I am weak.”
TshisaLIVE
2 months ago

'Skeem Saam' actress Pearl Maimela is now a ministering pastor but she won't quit acting and says will be on the screens soon.
TshisaLIVE
3 months ago

'Skeem Saam' stars Mmapitsi & Lizzy are BFFs in real life and fans love to see it!

"She was the first person I texted, when I was on my way to Limpopo after my mom and grandmother passed away. A couple of hours later, she joined me ...
TshisaLIVE
4 months ago

Both are alive and well!
TshisaLIVE
4 months ago