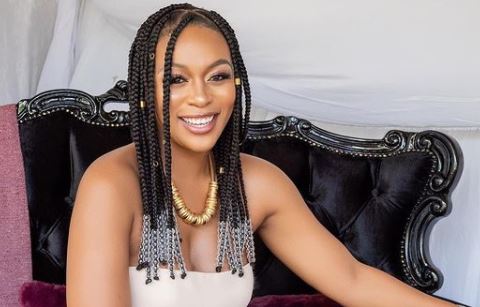 Tweeps have already predicted that the new series Shaka iLembe starring  Nomazamo Mbatha is going to be a huge hit.

Not only is she starring as an actress, but the Coming2America star is also an executive producer.

Her fans quickly remembered that this was something she had always mentioned that she would one day star in the film.

“Wait. Hold up. Didn't Nomzamo Mbatha mention this as one of the things on her vision board a few years ago? I have goosebumps! Well done mama,” tweeted one tweep.

The series is set in the 1700s, Shaka iLembe tells the story of the making of the iconic African king, played by two actors Lemongang Tsipa (adult king) and newcomer Ntando Zondi (boy king). Nomzamo Mbatha plays Queen Nandi, the revered mother of Shaka, with Thembinkosi Mthembu starring as King Dingiswayo and Wiseman Mncube in the role of King Zwide.

In a statement shared with TshisaLIVE the star said she was fortunate to be in the series.

“I am honoured to bring the giant that is Queen Nandi to life. History will remember those who informed its people of where we come from, to better understand who we are. I am fortunate to be part of a project that is much bigger than ourselves and to tell this story in our own language. Impi iyeza!” expressed Mbatha.

Speaking to Sunday Times at the time of her move to the States, the actress said it wasn't easy, and she said she experienced a culture shock and homesickness.

“I wasn't booking jobs, I was going for auditions and 'go-sees' — I was putting in the work.”

Six months in, she found herself deflated and thought, “I'm tired and I don't know if I can keep doing this. I planned to go home and told my manager and my agent, 'You guys call me when there's an audition, I'll fly in for it but I want to be home. I miss everything about home'.”

Wait. Hold up. Didnt Nomzamo Mbatha mention this as one of the things on her vision board a few years ago??? I have goosebumps! Well done mama♥️ https://t.co/JOWu8PkRHO

I cannot wait to see Nomzamo Mbatha as Queen 👑 Nandi ❤️, hopefully in future she will also echo as Mama Winnie Madikizela-Mandela in the future...she is a force to be reckoned with 👏🏾, with due respect for me in this generation of actresses, she's my no. 1🙌🏾 pic.twitter.com/VebXcktzdW

Nomzamo Mbatha is not done with y'all, she will mos def kill a Nomzamo Winie Madikizela Mandela movie/series. https://t.co/JOLwlGEgA6

“You ask what is needed? Boots. So we can go through the rubble and look for the lost bodies."
TshisaLIVE
2 months ago

Nomzamo Mbatha dishes on her 'empowered and sexy' Puma collection

SPONSORED | The Puma x Nomzamo Mbatha Shandu collection is African through and through, says the actress
Lifestyle
8 months ago

Nomzamo Mbatha said she's "standing in solidarity with the people of Afghanistan".
TshisaLIVE
10 months ago