Day of truth: we came close but the 'politics of the tummy' prevailed 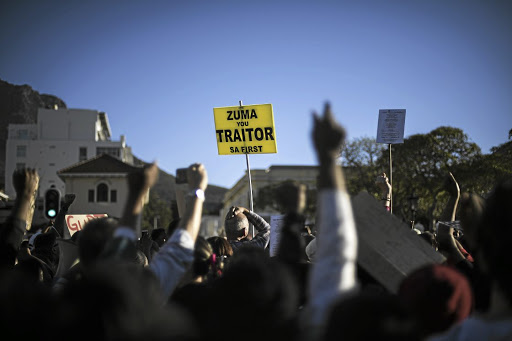 CLEAR MESSAGE Several thousand anti-Zuma protesters march towards parliament in Cape Town on the eve of the vote for the motion of no confidence in President Jacob Zuma on Tuesday Picture: David Harrison

As my old car chugged up Hospital Bend to hug the mountain side of De Waal Drive with its spectacular views of the bay, I could not help thinking of that courageous young medical student Philip Kgosana, who in 1960 led thousands of anti-pass protesters along this very road in his quest for justice in downtown Cape Town.

This morning the old fire station at the top of Roeland Street, from where you can see the buildings of parliament, was open for a change. Firemen appeared to be busy and a huge truck had an ominous sign painted onto its side: "Major public incident."

I was headed for breakfast with Cape Town's most famous student protester, who invited me to a watering hole called Truth Coffee Roasting in Buitenkant Street.

Universities are being transformed into degree factories

In its very essence, a university is and should be a place marked by reason, deliberation and the free exchange of ideas.
Ideas
5 years ago

This was an important day for Truth since the speaker had announced a secret ballot in which MPs would vote on a motion of no confidence in President Jacob Zuma.

As with Kgosana 57 years ago, people came streaming down Roeland Street carrying posters of all shapes and sizes. The messages were clear. Zuma must go. Zuma must fall.

Young journalists with cameras and notepads were everywhere. Overhead, the drone of a helicopter. Down side streets you found weary-looking policemen and women who had clearly seen this show before. Police vans were parked in visible places for everyone to see. Roads were closed off at key points as more protesters amassed.

Groups of young black DA protesters were everywhere, an unimaginable sight on the other side of our democracy.

A lone white man carried his poster high in the air - parliament should vote with its conscience. Everybody seemed to be moving now. The day of Truth had arrived.

I have now completed about a dozen book conversations in mostly packed venues from Cape Town to Johannesburg, and double that number of radio and ...
Ideas
5 years ago

Meanwhile, over a toasted cheese-and-tomato croissant, the famous fallist asked me a stunningly clear and appropriate question: Where do we really differ?

We do not actually. We are on the same page when it comes to the systemic nature of the crisis in student funding for higher education studies.

This cannot be resolved by the goodwill of individuals or even the growing contribution of the private sector. The state needs to repair a weak and leaky funding regime for poor students.

Where we differ is on strategy and tactics; I do not believe that you destroy on Friday what you need on Monday.

And in this regard the Soweto uprising of 1976 is a cautionary tale. A noble and necessary cause permanently dismantled the culture of teaching and learning in the majority of schools to this day.

One of former president Nelson Mandela's first projects was called "restoring the culture of teaching and learning" under the Reconstruction and Development Programme; it was impossible.

I cannot think of another country in the world where a book fair could generate so much racial unease.
Ideas
5 years ago

The higher-education student protests, necessary as they are, could do exactly the same thing to the future of universities. The real losers, once again, will be poor, black youth - not the middle classes, who have the financial capacity to opt out of the public system for studies elsewhere, even abroad.

A great breakfast, an even better discussion and we left posing for photos on the now very busy street outside.

Last week I had posted a Facebook message predicting that the vote of no confidence would fail; I could not see where the required 201 votes would come from. There are still too many party faithful dependent on the president for their positions.

A new president, cabinet and the government would render many of them unemployable. The politics of the tummy, some call it. Open or secret voting, we are not there yet.

But it came close - 177 for the motion, 198 against. Never before had so many ruling party politicians voted against their own president, about 30 of them.

Regardless, what was happening on the streets was a testimony to the growing strength of our democracy. Ordinary people came and expressed themselves against but also for the president. People stood into the night to await the vote count.

The events of the day seemed peaceful and there was no "major public incident" as far as I know. The vote was announced. Some stayed to celebrate. The majority went home.

Yet that long day would end with typical whiplash for South Africans. From the disappointment of the parliamentary vote in Cape Town, over in London our star athlete Wayde van Niekerk reclaimed his World Championship title as the fastest man on the planet over 400m.

We continue to live in hope.