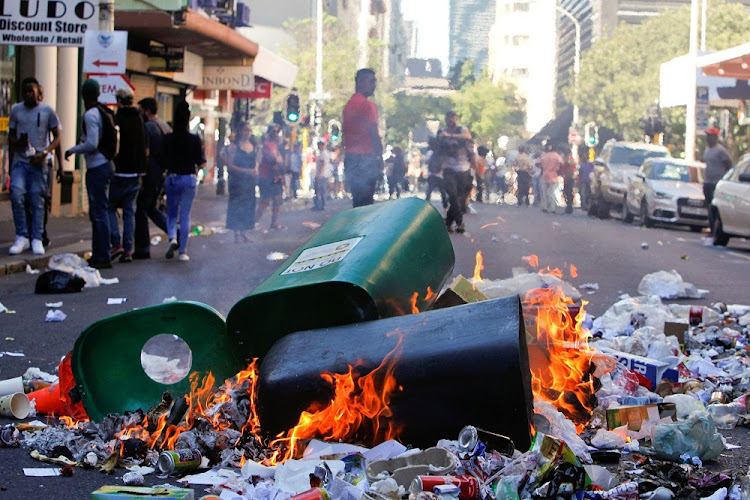 Students took to the streets last month to protest against the exclusion of debt-ridden students from tertiary education in 2021. Outstanding student debt at SA universities is just less than R14bn.
Image: REUTERS

With a Covid-19-hit, shrinking economy and a mounting public debt burden, finance minister Tito Mboweni announced a tight budget in February, including a constrained allocation to the department of higher education & training.

Within the department’s budget the allocation to the National Student Financial Aid Scheme (NSFAS) was set to increase from R34.8bn in the 2020/2021 fiscal year to R36.4bn in 2023/2024 — a cumulative increase in nominal terms of 4.6% over the three-year period. This allocation covers NSFAS bursaries to university students and students at technical and vocational education and training (TVET) colleges.

However, the Treasury’s Budget Review projected inflation at 3.9%, 4.2% and 4.4% respectively in the three fiscal years from 2021/22 to 2023/24. This means the consumer price level over the three years is expected to cumulatively increase by 13%, well in excess of the 4.6% increase government has budgeted for NSFAS. In addition, government expects the number of NSFAS students to increase.

SA universities opened belatedly in mid-March after protests on many campuses sparked by a combination of factors related to student fees and debt, ...
Opinion & Analysis
9 months ago

Predictably, student organisations countrywide have expressed their dissatisfaction, which led to protests and campus shutdowns in March. Tragically, a bystander in the protests, Mthokozisi Ntumba, died during police action in Braamfontein.

After the protests, higher education, innovation and technology minister Blade Nzimande announced a reallocation of the department of higher education & training budget, as approved by the cabinet. A further R6.3bn has been allocated to NSFAS. A total of R2.5bn of this reallocation came from a reduction in the general allocation for universities, R3.3bn from the National Skills Fund, and a further R500m from the TVET colleges’ new accommodation construction budget.

The provision of university subsidies was already a concern before this reallocation, with the subsidy per student in real terms in the department of higher education & training budget set to drop cumulatively by as much as 7% over the period 2020/2021 to 2023/2024. In addition to the subsidy and bursary pressures, student organisations are also demanding the full write-off of student debt. Outstanding student debt at SA universities stands just shy of R14bn. Much of this debt burden is carried by students from so-called “missing middle” households, defined as households with annual incomes of between R350,000 and R600,000.

With mounting financial pressure it is clear that the current model of student funding in SA is not financially or fiscally sustainable. The deteriorating fiscal condition also makes it unlikely that the government will be able to fully finance the missing middle. Nzimande has indicated that a national task team involving various stakeholders will be established to address the student funding challenge in a sustainable manner.

This task team will have to revisit the recommendations made by the Heher Commission in 2016. The commission recommended the implementation of an income-contingent student loan scheme. With an income-contingent loan the student will obtain a loan to cover all or part of his or her tuition, accommodation, books, living costs and transport.

Once a student has finished studying and started working loan repayment can start, but it only commences when the income exceeds a set threshold. The amount paid per month is also linked to the former student’s income level. The loan repayment period can be capped, for instance, at 25 or 30 years. Whatever is not repaid after that is written off.

Such a loan scheme could augment a revised NSFAS bursary scheme, and instead of the hard R350,000 family income cut-off currently applied for NSFAS bursaries, it could be implemented with a sliding family income scale that allows for a combination of bursary and loan financing. Thus, poorer students will receive a bigger or full bursary, reducing their need for a loan, while better-off missing-middle students will need to obtain a partial or full loan.

Will students be able to afford the debt burden they incur with such loans? In 2019, BusinessTech conducted a survey among eight large SA universities to ascertain the range of tuition fees students face per year in BA, BCom, BSc, LLB, and BEng degrees. Annual tuition fees ranged from R32,560 to R68,135.

If this was the cost for the first year of study, allowing for further tuition fee increases of 4.7% per year for a second (2022) and third (2023) year, and 4% inflation for all other costs, the total cost over three years with a degree obtained at the end of 2023, will range between R317,716 and R441,113, to be repaid over 10 to 30 years. Note that this cost is about the same as the retail price of R376,500 for a Corolla 1.2T Xs, a mid-size family car typically bought by middle-class (including graduate) families. The car, though, is repaid over just five years.

Given the limits on government finance, even to fund all income-contingent loans, there is a need for significant private sector involvement (banks, pension funds) in funding the loan scheme.

If 300,000 students each incur a loan averaging R120,000 per year, the cost would be R36bn per year (and at a GDP of R5 trillion, 0.7% of GDP), an amount that is surely feasible when combining government and private sector resources. Universities are institutions that effect social change and are drivers of economic growth. Hence, both the public and private sectors are key beneficiaries of the output of universities, and therefore a solution towards sustainable student finance will need to involve an appropriate public-private partnership.

Such a public-private partnership can include a sliding scale of interest paid on the income-contingent loans, based on the student’s household income coupled with a partial or full underwriting of the loan by government. Commercial banks can administer the loan scheme as they already have well-developed financial vetting systems and expertise. To reduce the risk of non repayment, and because the loan repayment is linked to a worker’s income level, the SA Revenue Service can collect instalments and pay it over to the loan scheme.

Nsfas is owed R36.4bn, while 21 universities grapple with R10.4bn in outstanding fees from the past decade
News
9 months ago

There are, however, a number of factors that could undermine the successful implementation of an income-contingent loan scheme. These include the lack of collateral and the long lead time before repayment starts, the need to subsidise low interest rates, and lastly the risk of low total repayments. All of these will require that the government spends money to ensure the participation of banks and other funders.

The private sector, though, needs to realise that even though a student loan system inevitably involves risk, it is in the interest of the long-term growth and profitability of the private sector to fund such loans. It is also important for the government to realise that higher education is both a private and public good, and that contributing a component to student finance is an investment, not merely an expenditure.

• Prof Petersen is rector and vice-chancellor, and Burger is professor of economics and pro-vice-chancellor: poverty, inequality & economic development, at the University of the Free State.

Money taken from the National Skills Fund will hinder the process of skills development and training which would benefit millions of unemployed youth ...
Politics
10 months ago

SA's 26 universities are scrambling to find ways to reduce the impact of the student debt of between R5bn and R7bn on their operations.
News
10 months ago