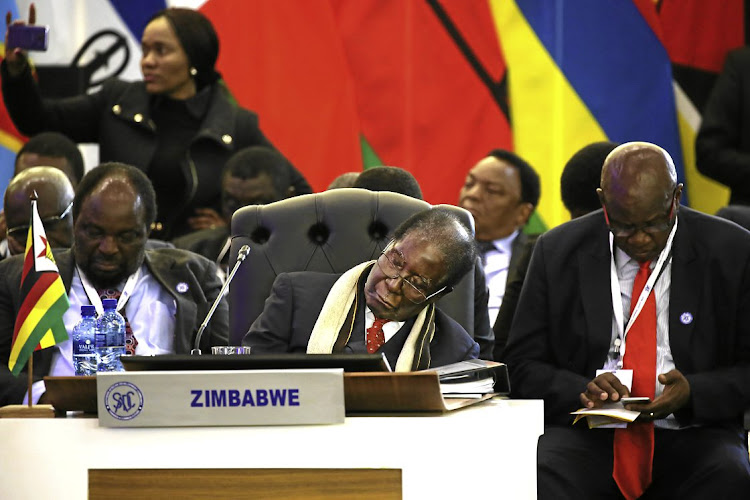 Was he resting his sensitive eyes or dozing off while US President Donald Trump delivered his jarring "Rocket Man" speech to the United Nations?

Images of Zimbabwean President Robert Mugabe‚ 93‚ slouched in a chair‚ head propped up by his hand‚ were beamed across the globe from the UN.

While some world leaders were rattled by Trump threatening to pulverise North Korea‚ most of the delegation from Zimbabwe appeared to have seized the opportunity to take a short nap.

President Mugabe need to retire for GOD sake, always on codeine every time. Sleep every where. #UNGA #Africa pic.twitter.com/jQLQHOjDsU

But he is frequently photographed at important events where he appears to be asleep.

WATCH | Where in Africa is 'Nambia', Mr Trump? Twitter has a field day

US President Donald Trump referred on Wednesday to the non-existent country of 'Nambia', during a lunch with leaders of several African nations amid ...
News
4 years ago

Presidential spokesman George Charamba has‚ however‚ rubbished such reports. He told The Herald newspaper in Zimbabwe that Mugabe frequently looks down to avoid bright lights after having had specialised eye treatment in Singapore.

"At 93‚ there is something that happens to the eyes and the President cannot suffer bright lights. If you look at his poise‚ he looks down‚ avoids direct lighting‚" he said.

Not everyone appears to agree.

Jessie Majome‚ from the Movement for Democratic Change (MDC) said: "How he can sleep through a nuclear war speech is astounding. To travel so far with so many delegates at such a cost only to sleep so soundly is disconcerting‚" News24 reported.

US President Donald Trump has set the world atwitter after a doomsday warning to North Korea's Kim Jong Un‚ whom he dubbed “Rocket Man” at the United ...
News
4 years ago

Two encounters with remarkable women revealed a glimpse of a future in a "better South Africa in a better world", to adapt the slogan of our ...
Ideas
4 years ago

The Zimbabwean embassy in Pretoria entered the fray on Tuesday in the case between Zimbabwe’s First Lady‚ Grace Mugabe‚ and the model she allegedly ...
News
4 years ago