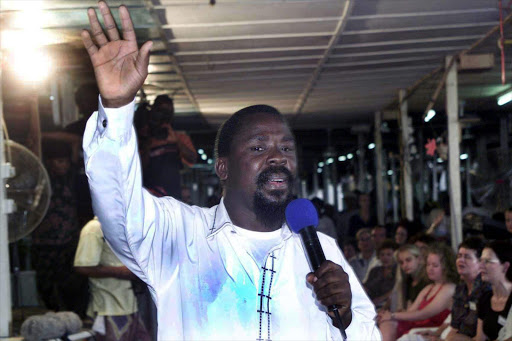 President Robert Mugabe has always told Zimbabweans not to be fooled by prophets‚ yet one of them could have seen his fall coming.

A video believed to have been taken in 2014 and which is doing the rounds on social media shows Nigerian Prophet TB Joshua saying a president from a Southern African country whom he did not name would be held hostage.

“The military are interested in embarrassing a President – either they kill him or kidnap him. They are still having that plan to kidnap either a President or Vice-President of that nation or the First Lady of that nation‚” Joshua is heard saying in the video. He was apparently speaking at his church‚ The Synagogue‚ Church Of All Nations (SCOAN) in Lagos‚ Nigeria.

Meanwhile‚ for a country with "Mugabe insult laws" under Section 33 of the Criminal Law‚ jokes about the president in public or social media are high risk business but lately the unthinkable has happened and social media memes as well as jokes are in overdrive.

The coup in Zimbabwe was smooth with no officially confirmed casualties and the army still insists it's not a coup but a hunt for "criminal elements". Hence one joke doing the rounds is that there's a new entry for a coup in the Oxford dictionary: "the cleansing of criminals from within a country".

In contrast to typical coups d'état where strongmen are turned into weaklings dragged from their hiding holes‚ Mugabe and his family are said to be safe at home. It is reported that he even had a word with President Jacob Zuma on the phone on Tuesday. As such the coup is said to have‚ "gone to a private school" for good manners.

In Zimbabwe there's an army football side‚ Black Rhinos FC‚ that was relegated to the less fashionable Division One league. It is now said the army should elevate it to the premiership in the same way they raised a nation's hopes by making Mugabe eat humble pie.

Koo‚ a South African food processing company‚ is getting free mileage. Its baked beans brand has the face of Mugabe under the Koo logo doing the rounds. Had Mugabe been firmly in charge it could have been banned from Zimbabwe.

A similar situation almost happened to the Nandos franchise in 2013 when it ran a Mugabe advert that had him as "The last dictator" alone at a dinner table reminiscing about his past colleagues such as Muammar Gaddafi. The advert was taken down due to Zimbabwe government pressure.

Another joke that almost shook the internet read:

"BREAKING: Zimbabwean forces hand back power to Mugabe. Televised live on international media few minutes ago‚ the army chief in a colourful ceremony‚ handed back Mugabe his power bank and usb cable (small pin) which he had forgotten in statehouse. Sources: YOU!"

There is also a graphic of a toilet sign for men and women but the "men" is replaced with "Chiwenga" the army general who had the guts to shake things up.

"It came as a bitter-sweet shock for Zimbabweans. They honestly don't know how it will pan out but the fall of Mugabe is a relief. Why not have fun while it lasts?" said Peter Moyo‚ a university student studying towards a degree in theatre arts.

A man who has made a living from selling Zanu PF regalia on the streets of Harare says November was meant to be a good month because it's the eve of the party's annual conference where party supporters and senior officials try to outdo each other with praises. Some go to the extent of calling Mugabe "cremora" or "God's right hand man".

"December was going to be a big deal with Mugabe set to be resoundingly confirmed as the party's presidential candidate for next year. His face would have sold but now no one wants to touch him. Actually his picture can get one in trouble with the army‚" he said.

"Mugabe is suddenly a real Zimbabwean; an adult with several degrees just sitting idly at home‚" @CynicHarare said on tweeter.

President Robert Mugabe returned home on Thursday from Singapore amid a storm of speculation about his health, and intensifying anxieties about what ...
News
10 years ago

Zimbabwean politicians have sometimes shown an affinity for the supernatural, with the classic example being that of self-styled spirit medium ...
Lifestyle
10 years ago

Ask anyone in Zimbabwe who "TB Joshua" is and many can readily list the prophecies and healings with which the Nigerian spiritual leader is ...
News
12 years ago