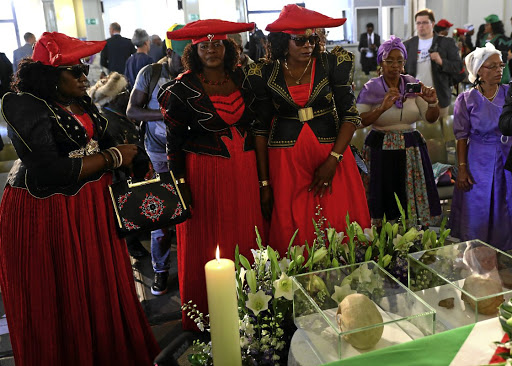 A Namibian delegation visiting Berlin receives the human remains from Germany of some of the Herero and Nama people massacred by German imperial troops from 1904-1908.
Image: Reuters

Germany will pay reparations to Namibia for what has been described as the first genocide of the 20th century, in which about 75,000 people died.

The former colonial power is expected to provide compensation by funding social projects benefiting the descendants of the survivors, according to German public broadcaster Deutschlandfunk.

The two countries have agreed that German president Frank-Walter Steinmeier will offer a formal apology in the Namibian parliament, The Times reported on Wednesday.

Windhoek's special envoy on the Nama-Herero genocide, Zed Ngavirue, said there had been “fruitful discussions with the German government” but would not confirm an agreement, The Namibian reported.

“I cannot reveal any information yet without informing my principals, the president [Hage Geingob] and the minister of international relations [Netumbo Nandi-Ndaitwah],” Ngavirue was quoted as saying.

In 1904, German imperial forces ended an uprising by the native Herero people and drove survivors into the desert, where thousands died of starvation or dehydration.

Over the next four years, half of the Herero and Namaqua people imprisoned in concentration camps died of disease, malnourishment, overwork, beatings and executions.

The Ovaherero Traditional Authority and the Nama Traditional Leaders Association told The Namibian they felt betrayed by the agreement, which they described as a “public relations coup by Germany” negotiated without the involvement of the “victim communities”.

When Pedro Dhila left his homestead in northern Namibia one year ago to seek greener pastures in the country's capital, he meant it both literally ...
News
2 years ago

A Namibian tribal leader who led the fight for reparations against the atrocities committed by colonial Germany has died, a family spokesman said ...
News
7 years ago

On Friday, Germany will return the first 20 of an estimated 300 skulls of indigenous Namibians butchered a century ago during an anti-colonial ...
News
10 years ago