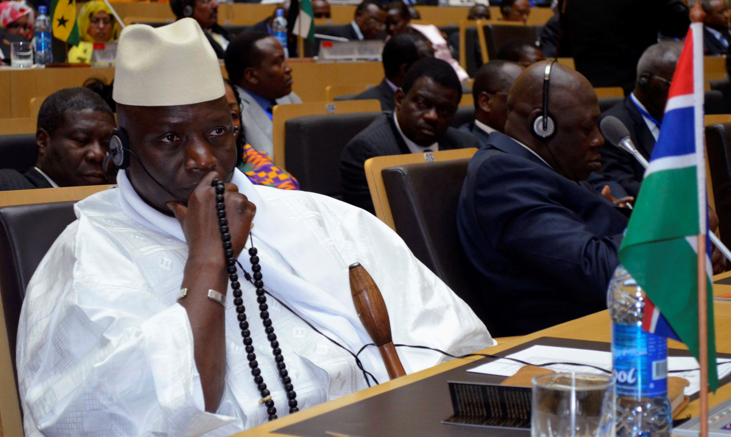 Gambia's President Yahya has made lavish promises on the campaign trail, including to build hundreds of miles of roads and deliver uninterrupted electricity to the whole country by 2023.
Image: REUTERS/Tiksa Negeri

At a pre-election rally last month, supporters of Gambia's main opposition coalition cheered the opening of the star attraction - a speech by former President Yahya Jammeh delivered over a crackly phone line from exile 2,000 miles away.

"(President) Adama Barrow destroyed everything good I left for Gambians to benefit from - the hospitals, agriculture and education," Jammeh said to enthusiastic applause. "We should all unite and vote him out."

Gambians go to the polls on Saturday and for the first time in 27 years Jammeh, who took power in a 1994 coup, will not be on the ballot.

He fled to Equatorial Guinea in 2017 after refusing to accept defeat to Barrow, ending a tenure marked by killing, torture , financial plunder and false claims of a homemade cure for AIDS .

Last week, Gambia's Truth, Reconciliation and Reparations Commission (TRRC) said between 240 and 250 people died at the hands of the state under Jammeh, and recommended that those responsible be prosecuted .

Yet Jammeh's influence remains. In a string of speeches by telephone, he has urged crowds of rapt listeners not to vote for Barrow and has persuaded supporters to join a coalition run by opposition candidate Mama Kandeh, who came third in 2016 and who Jammeh has described as his "slave".

The move has split Jammeh's APRC party, some members of which have formed an alliance with Barrow's NPP.

It has also put pressure on Barrow to convince voters that he has dragged the country out of its difficult past. That is not a straight-forward task after Covid-19 crippled tourism under Barrow and shrank the tiny economy in 2020.

Thousands of Europeans flocked to its white sand beaches each year prior to the pandemic. It is also a peanut and fish exporter. But unemployment in the country of 2.5-million people forces the young to attempt perilous migration routes to Europe by boat or through the Sahara Desert.

Jammeh did not respond to requests for comment. He has denied wrongdoing. In one recent speech he promised to return home, an unthinkable prospect for some Gambians.

"For people who were tortured, raped or had loved ones killed under Yahya Jammeh, it's painful to see him trying to play king-maker instead of answering atrocity charges before a court of law," said Reed Brody from the non-profit International Commission of Jurists, who has worked with Jammeh's victims.

A former beauty queen who testified she was raped by Gambia's ex-president Yahya Jammeh is making a documentary to tell the stories of other women ...
News
1 year ago

Jammeh's fall was seen as a major win for democracy in the region, though hopes of a domino affect have largely been dashed by coups in Mali, Chad and Guinea over the past year. This election is seen as a test of the strength of Gambia's democracy.

Barrow will face five challengers, including former mentor Ousainou Darboe and Essa Mbye Faal, who served as chief counsel of the TRRC which chronicled the abuses of the Jammeh era.

Critics say Barrow's rule has been characterised by crime and spotty internet and power networks.

Some are mistrustful of the president. Barrow initially said he would only serve as a transitional leader for three years after Jammeh left.

He has made lavish promises on the campaign trail, including to build hundreds of miles of roads and deliver uninterrupted electricity to the whole country by 2023.

For all the difficulties, many see Barrow's rule as a welcome break from the past.

"We are free to express ourselves," said Ousman Jobarteh, a 47-year-old businessman. "We go to bed without ever thinking that we might be picked up by agents of the state."