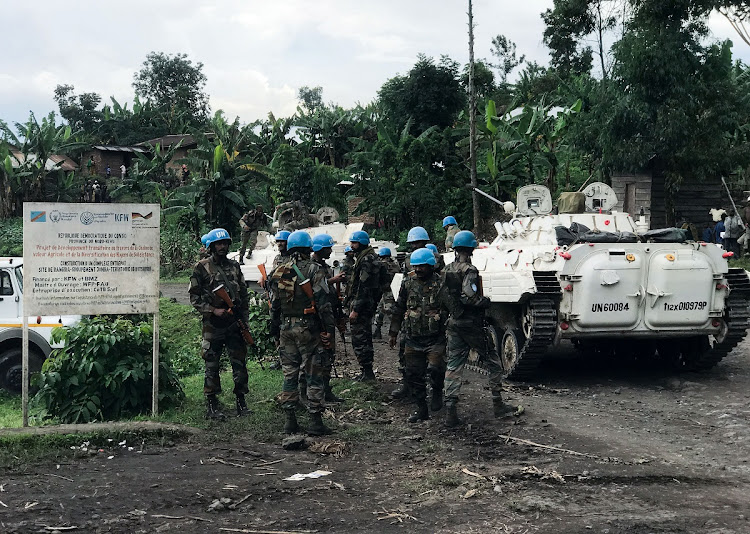 UN peacekeepers gather to patrol areas affected by M23 rebels in the east of the Democratic Republic of the Congo.
Image: Djaffar Sabiti/Reuters

There is “solid evidence” Rwandan troops have been fighting alongside the M23 rebel group in eastern Democratic Republic of the Congo and providing it with weapons and support, say UN experts.

The findings were contained in a confidential report seen by Reuters on Thursday.

Rwanda has previously denied accusations by Congo's government that it supports M23 and has sent troops into the country. M23 has denied it receives Rwandan support.

The UN Group of Experts “obtained solid evidence of the presence of, and military operations conducted by, RDF (Rwandan Defence Force) members in Rutshuru territory between November 2021 and July 2022", the report said.

RDF members conducted joint attacks with M23 fighters against Congo's army and Congolese armed groups, and provided the rebels with weapons, ammunition and uniforms, it added.

Rwandan authorities did not immediately respond to a request for comment on the findings.

Since May M23 has waged its most sustained offensive in years, killing dozens and displacing tens of thousands of people. By July it controlled a territory almost three times as large as it did in March.

“The truth always triumphs in the end. We hope that conclusions will be drawn quickly to put an end to Rwanda's interference and bring back lasting peace,” he tweeted.

The M23 insurgency stems from the long fallout from the 1994 genocide in Rwanda. The group was formed in 2012 and claims to defend the interests of Congolese Tutsis, the ethnic group shared by Rwanda's president, Paul Kagame, against Hutu militias.

Since May M23 has waged its most sustained offensive in years, killing dozens and displacing tens of thousands of people. By July it controlled a territory almost three times as large as it did in March, the UN group said.

The M23's resurgence has inflamed regional tensions and spurred deadly protests against the UN peacekeeping mission in Congo, which civilians accuse of failing to protect them.

The UN group detailed evidence, including photos of Rwandan soldiers in an M23 camp, drone footage showing columns of hundreds of soldiers marching near the Rwandan border and photos and videos showing M23 fighters with new uniforms and equipment similar to that of the Rwandan army.

Rwandan troops and M23 jointly attacked the Congolese army camp in Rumangabo in May, it said. When M23 took control of the strategic border town of Bunagana in June, Rwandan soldiers were present or had provided equipment to the rebels, the report said.

Rwanda and neighbouring Uganda have a long history of military intervention inside Congo. The two countries invaded in 1996 and 1998, saying they were defending themselves against local militia groups.

A target of M23 and Rwandan operations in Congo has been the Democratic Forces for the Liberation of Rwanda (FDLR), a Hutu militia Rwanda accuses Congo of using as a proxy. Congo's government has denied this.

Some members of Congo's army have supported and fought alongside a coalition of armed groups, including the FDLR, the UN experts said.

Congo and Rwanda to meet for talks amid tensions over rebels

President Paul Kagame said on Monday he did not mind Rwanda being excluded from a regional military force battling rebels in the Democratic Republic ...
News
1 month ago

Senegal President Macky Sall, who chairs the Africa Union organisation, on Sunday called for dialogue between the Democratic Republic of Congo and ...
News
2 months ago

The Democratic Republic of the Congo has summoned Rwanda's ambassador and suspended RwandAir flights to Congo in response to what it says is Kigali's ...
News
2 months ago