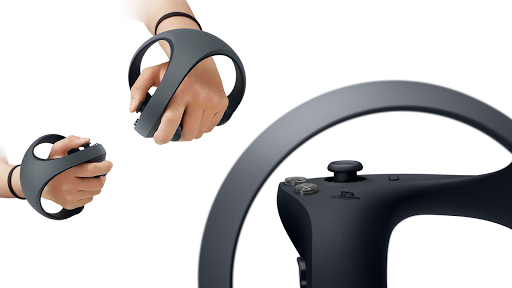 According to the reveal blurb on the PlayStation Blog by Sony VP of platform planning and management Hideaki Nishino, the ergonomic “orb” controller features adaptive triggers, haptic feedback, touch detection, and improved tracking tech, plus the same controller buttons and analogue controls as the PS5’s DualSense controller.

SIE’s Product, Engineering, and Design teams have collaborated to build our new VR controller from the ground up with a goal of making a huge leap from current-gen VR gaming. We’re thrilled with the controller we developed, but what matters now is how game creators will take advantage of the features to design the next generation of VR experiences. Prototypes of our new VR controller will be in the hands of the development community soon, and we can’t wait to see what ideas they come up with and how the controller helps bring their imagination to life!

The PS5’s new VR system was announced in February but Sony isn’t ready to actually show us the headset yet. The company has confirmed, however, that the next-gen PSVR will connect to consoles with just one cable – a dramatic innovation over the original, Cthulhu-level PSVR.

But more importantly, does this mean a new Beat Saber game? Because everybody knows VR = Beat Saber, and everything else is bonus.

Debuted in April 2020, the pandemic-approved Play at Home program features a selection of games that are totally free for PlayStation gamers – no PS ...
News
10 months ago

It’s official! Sony’s next generation of console gaming will also be joined by the new generation of virtual reality.
News
10 months ago

The company has been toying with the idea of AR glasses for a few years now but has never unveiled anything that could be considered potentially ...
News
10 months ago

The good news this week is that PC subscribers will be able to dip their toes into an expanded catalogue of games, as EA Play is finally being rolled ...
News
10 months ago