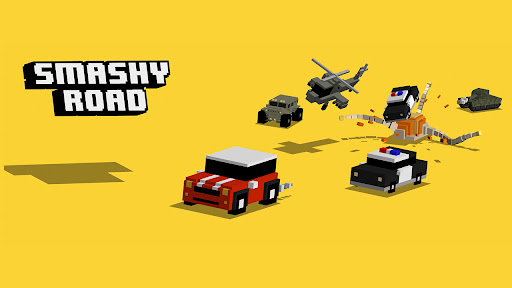 I’ve always enjoyed the cop chases in GTA games, the adrenaline rush from evading the ever-increasing might of the forces chasing after me was a fun element to the game. Smashy Road: Wanted 2 is the second game in the series that is essentially just that, one big cop chase without all the storyline stuff we often just skip over.

The game throws you into the action as soon as you start it up. In fact, there is no loading screen, just your vehicle driving around. As soon as you touch the screen, the action starts and the cops are on you, trying to take you down. The game developers drew a lot of inspiration from the original GTA games, but it’s not trying to be a clone. Smashy Road: Wanted 2 feels like a fresh arcade action game that works great as a mobile game.

Smashy Road is free to play but some game items can also be purchased for real money. If you don't want to use in-app purchases, please disable in-app purchases in your device's settings.
Image: Supplied
​_

While you are trying to evade the cops, you have various missions to complete but these feel more like an optional offering than the core focus of the game. It’s fun to just drive around, but after your first few hours of just driving aimlessly, you’ll also want to tackle things a little more strategically. The open-world, procedurally generated maps give you plenty of room to manoeuvre and you’ll want to consult your map often to find your best route.

Because you are always on a wanted level, the action can get rather intense and as you’d expect, the longer you evade arrest or death, the more aggressive the chase becomes; from police to SWAT, the army and even an intergalactic police force.

Because you are always on a wanted level, the action can get rather intense and as you’d expect, the longer you evade arrest or death, the more aggressive the chase become.
Image: Supplied

In the last few weeks, I’ve managed to unlock a wide range of vehicles, from a hot rod to a hovercraft – which is great to drive on water. There are 60 vehicles and 60 characters to unlock and play and the missions are loads of fun. If you like competitive play you can chase the daily leaderboards for bragging rights.

If you enjoy quick games with loads of action then you should try out this fun title, I find it hard to put down.

Smashy Road: Wanted 2 is available on the App Store and Google Play.

From learning FIFA on a friend’s console to winning his first tournament at only 16: The story of Yvng Savage
News
2 months ago

Although Rustler has been in Steam’s Early Access library since 2019, the game’s developers, Jutsu Games, have recently announced that this medieval ...
News
2 months ago

Is it worth buying the Nintendo Switch OLED?

The new version of the Nintendo Switch was officially announced on Tuesday this week. It had been speculated at for a few years now, and fans knew it ...
News
3 months ago

Mettlestate VIP Subscription: What you need to know

The Mettlestate VIP subscription will set you back a mere R45 per month.
News
2 months ago