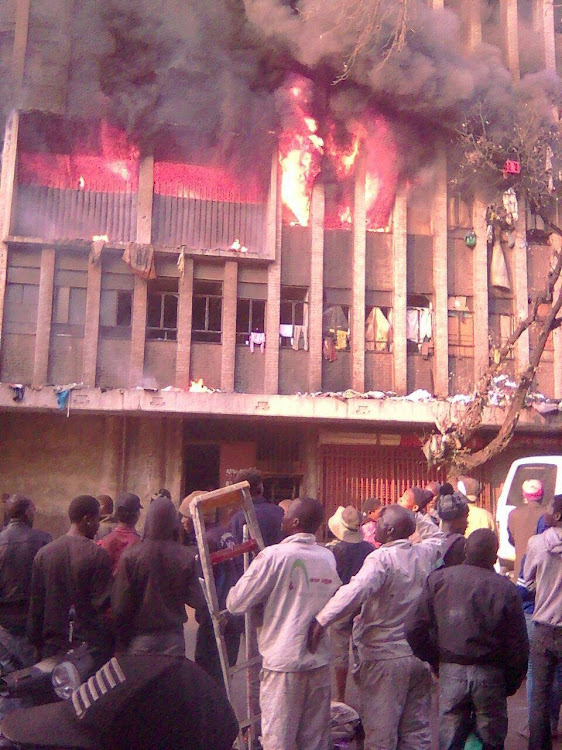 The burning building on the corner of Nugget and Jeppe street.
Image: Supplied

The Cape York Building at the corners of Rahima Moosa (formerly Jeppe) and Nugget Streets in Johannesburg‚ which caught fire on Wednesday morning resulting in the death of seven people‚ is known to the authorities.

It caught fire four years ago: in August 2013‚ four people‚ including a baby‚ died in the fire on the seventh floor of the building that was caused by a jilted lover.

In May‚ Johannesburg Mayor Herman Mashaba has also visited the building in May this year with a squadron of Johannesburg Metropolitan Police Department (JMPD )officers in an effort to find a 13-year-old girl who was missing and suspected to be in that hijacked building.

The building does not have electricity‚ water connections and sewerage facilities. Garbage is also not collected.

Johannesburg MMC for Public Safety Michael Sun warned during the visit in May that if a fire were to break out‚ the thousands of people who occupy the building would not be able to escape.

Sun also said buildings like these harboured a lot of criminals.

Mashaba has also been hands-on in addressing the problem of hijacked buildings in the inner city.

Blankets and sheets tied to what used to be metal window frames painted a stark picture of the desperate measures residents were forced to resort to ...
News
4 years ago

This story from our archives highlights the desperation of its residents‚ who four years ago were paying to live in a block with no water or power.
News
4 years ago

One of them‚ Vannin Court‚ is owned by the city. It was found that that the occupiers are renting beds in the units from “owners” for amounts ranging from R250 to R1‚200 per person.

Mashaba said on Friday the city would now find alternative accommodation for the occupants‚ and would then be able to close off the buildings and ensure that they are redeveloped into low cost affordable housing for Johannesburg residents.

In a statement released on Wednesday‚ about the Cape York fire‚ Mashaba said he work with the Emergency Services department to get all hijacked buildings in the city declared unsafe.

He said the City of Joburg would also increase raids of the hijacked buildings.

"The building has been declared a crime scene for the duration of this investigation; we have agreed with the building’s owner that it will be sealed once the investigation is complete‚" Mashaba said.

He said the City of Joburg is in a process of finalising an analysis of all city-owned buildings with the aim of converting them into "affordable‚ low cost housing".

"We have also allocated R219 million to JOSCHO (Johannesburg Social Housing Company) in our adjustment budget for this purpose. "The revitalisation of the inner city is key to ensuring we build a safe‚ inclusive City which holds opportunities for our all residents.

“To achieve this‚ rundown and hijacked buildings must be turned into quality low cost housing for residents and affordable rental spaces for small businesses‚” said Mashaba.

According to Mashaba‚ the City of Joburg is facing a major housing backlog estimated at 300‚000 units‚ and an average delivery of 3‚500 housing units per year.

“As such‚ we have limited space to move our people out of these buildings.

“Making matters worse‚ slumlords are using our residents’ desperation to their advantage by extorting huge sums of money from those who turn to them for shelter‚ even under the most horrible of living conditions‚” Mashaba added.