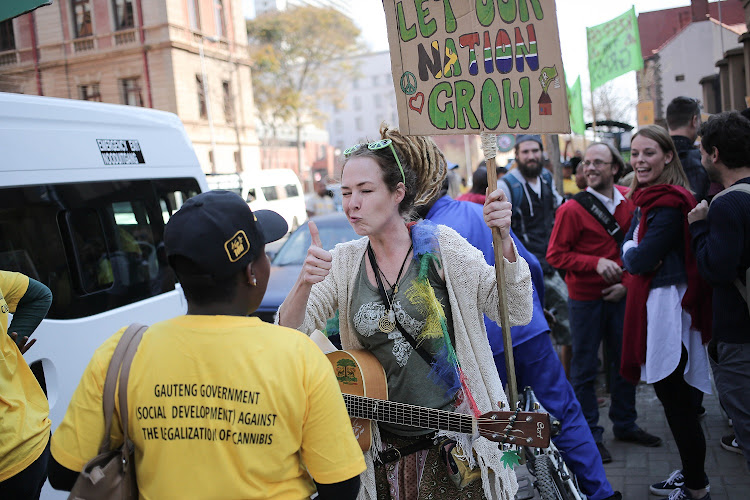 Caiti Woollcott gestures to protesters opposing the legalisation of cannabis outside the North Gauteng High Court after the dagga couple challenged the constitutionality of dagga laws
Image: Alaister Russell/The Times

The Gauteng Department of Social Development is paying for the transport and T-shirts for protesters from various anti-drug groups demonstrating outside court at the dagga trial in Pretoria.

It provides the protesters with T-shirts with the word cannabis misspelt as "cannibis".

Some of the protestors were dancing in the road and getting in the way of cars on Monday afternoon.

Some people took to twitter to complain about the use of taxpayers’ money for demonstrators.

Members of the department are also protesting‚ it confirmed in a media statement it had sent staff from its office to protest. A TimesLIVE journalist also chatted to some government workers from the department attending the protests.

Spokesman Mbanga Xaba said the department was paying for transport and T-shirts for the protesters.

About 100 to 200 protesters were at the court for the whole of last week and protests are continuing this week‚ with demonstrations planned until next week.

Different individuals come each day to show that a wide range of people oppose the ban.

Most say that dagga is the "gateway drug" and leads to use of more addictive substances like Tik and Nyoape.

Government sponsored posters include: "High on life not dagga"‚ "The masses have spoken"‚ "No to dagga in SA" and "SA has enough challenges".

When government scientists in the UK examined if dagga should be reclassified as a less dangerous drug and criminal penalties reduced‚ the US ...
News
4 years ago

Psychiatrist and world-renowned drug expert Professor David Nutt‚ under cross-examination‚ said the alcohol industry is too powerful worldwide and ...
News
5 years ago

"Cannabis does not cause schizophrenia." This is the conclusion of Professor David Nutt‚ psychiatrist‚ neurologist and director of the ...
News
5 years ago

Mothers of drug addicts from townships devastated by the "scourge of drugs" will testify for the government in their case against the dagga couple.
News
5 years ago