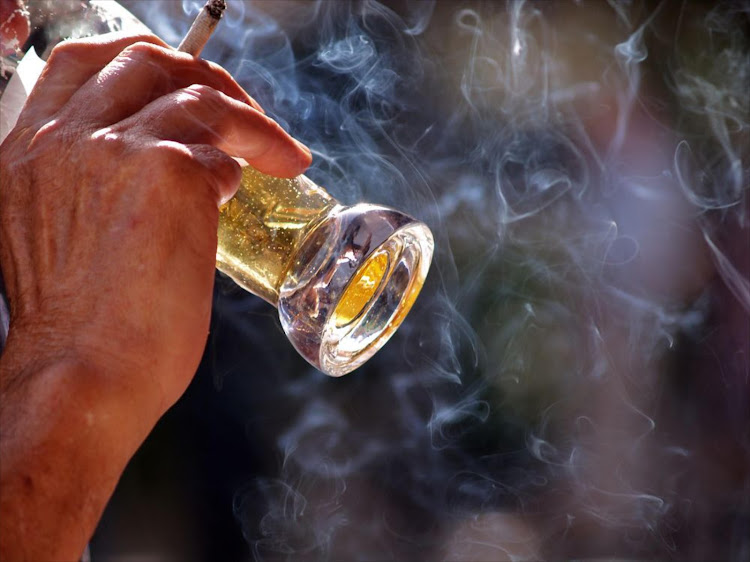 A new US study finds that smoking can prime the desire to drink more alcohol -- and to keep on drinking.
Image: bunyos30/shutterstock.com

The availability of alcohol and its role in fuelling crime has come under scrutiny in a new report released on Wednesday.

The State of Urban Safety Report drew some interesting links between crime and other ills in society.

“Cape Town has a population that is growing more slowly than Johannesburg and Tshwane‚ and has the lowest level of poverty (as measured by the Human Development Index‚ HDI)‚ the lowest income inequality‚ and the second lowest youth unemployment rate of all the cities. And yet Cape Town has extremely high levels of crime‚” the report said.

“So‚ what is driving crime? An answer may lie in the disproportionate access to alcohol‚ drugs and firearms‚ which is more than twice that of any other city.

“This suggests that access to alcohol‚ drugs and firearms should be one of the more productive areas for crime reduction policy focus.”

On a cold July evening in the township of Galeshewe on the western flank of Kimberley‚ members of Operation Wanya Tsotsi gather at dusk on an open ...
News
4 years ago

The report was compiled by members of the Urban Safety Reference Group (USRG) hosted by the South African Cities Network (SACN)‚ with the support of the GIZ-Inclusive Violence and Crime Prevention (VCP) Programme. The report is an update on the state of crime and violence in South Africa’s major cities‚ and a review of knowledge generation and sharing among city safety practitioners over the past year.

It covered nine urban municipalities over an 11-year-period of 2005/06 to 2015/16‚ using data from government departments‚ Statistics SA and other organisations.

In the report‚ researchers looked at the links between population growth‚ poverty‚ alcohol and crime.

Researchers also explored the social dynamics at play in the country’s economic hub‚ the City of Johannesburg.

The city’s indicators confirm the safety challenges highlighted in the previous State of Urban Safety in South Africa Report (SACN‚ 2016) with rapid urbanisation and the related problems of homelessness and unemployment.

“The city ranks first among the cities for rapid population growth‚ population density‚ social family disruption and income inequality. However‚ the city fares relatively well on measures of poverty and youth unemployment‚ as well as informal housing and service deprivation. This suggests that the city should focus much of its policy attention on reducing the negative effects of urbanisation and inequality‚” the report said.

Another observation made by researchers was that Nelson Mandela Bay‚ Buffalo City and Mangaung are struggling with opposite challenges to Johannesburg.

“However‚ the three cities also have the highest youth unemployment rates‚ which may explain their violent crime levels. A study conducted in 63 countries found that inequality‚ followed by youth (male) unemployment‚ had the highest correlation to murder and assaults (Wood‚ 2006)‚” researchers argued.

Another city that received focus was the eThekwini metro. This coastal city has the lowest HDI score in all the nine cities‚ apart from Msunduzi Municipality‚ which is also in KwaZulu-Natal. Furthermore‚ only Cape Town rates higher than Durban on the access to alcohol‚ drugs‚ and firearms indicator.

“These areas – human development and access to alcohol‚ drugs‚ and firearms – should receive considerable city focus for sustained crime reduction. As noted‚ this diagnostic is a modest first step. Future reports should aim to refine these indicators‚ to improve their quality and usefulness‚ to begin to track their progress over time‚ and to focus on the statistical correlations that they may reveal at the city or sub-city level‚” researchers said.