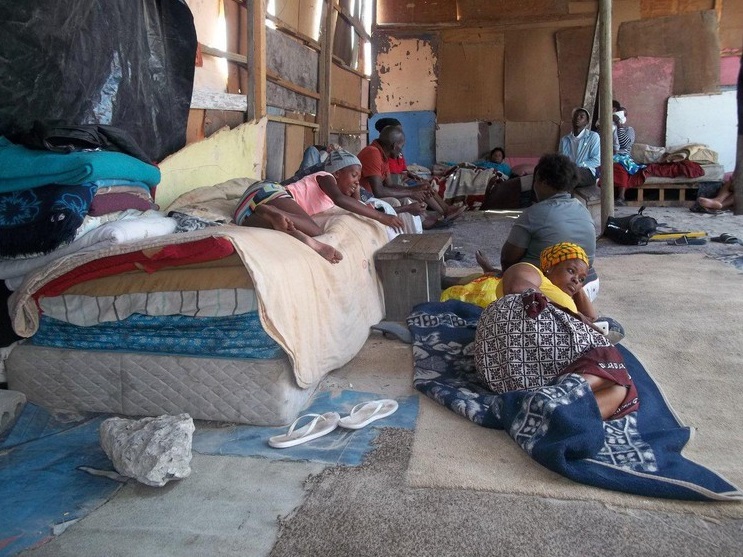 After their shacks were removed, land occupiers have moved into this makeshift shack in Mfuleni.
Image: Vincent Lali

Law Enforcement removed a large makeshift shack where a number of evicted land occupiers were living in Sondela‚ Mfuleni‚ on Friday.

This followed the demolition of more than 100 structures erected on vacant land about two weeks ago.

Last year Khwezi Ndabeni‚ a community leader in Sondela informal settlement‚ was in a similar situation to the current occupiers. She was also homeless and stayed in a communal shack on the same land before the City allowed her and other homeless residents to stay in what is now called Sondela. She lives a short walk from the makeshift shack.

Ndabeni described Friday’s removal: “The officials threw away food and paraffin bottles and damaged pieces of furniture belonging to homeless residents.” But she said the land occupiers rebuilt the large shack immediately after they left.

“These residents live along with their babies under unbearable conditions‚” said Ndabeni.

The roof is made of old wooden planks‚ ply boards and pieces of thick plastic. Most of the occupiers are backyarders‚ people who rent shacks in the backyards of formal homes. But faced with cramped conditions coupled with high rents‚ many have taken part in land occupations across Cape Town over the past month.

Ndabeni said that the City allowed her and others to stay in what has become the Sondelo informal settlement in April last year. She claims the City “began to give us serious attention” after a five-month-old baby died.

Ndabeni said the residents of the makeshift shack are hungry and exposed to the weather. She helps about 20 children who stay in the shack to go to their schools and crèches daily. “I wake up early and collect them before they bathe and iron their clothes in my shack and in other resident’s shacks‚” she said. “Because we are also parents‚ we feel for the poor kids and don’t want them to drop out of school because of their living conditions.”

She said that she and other Sondela residents allow about six elderly land occupiers to stay in their shacks. “They sleep in our shacks because they have nowhere else to sleep.”

Ndabeni said the residents are not safe in the makeshift shack. “Irresponsible drunks from nearby taverns and shebeens throw stones into the shack when they walk past it at night.”

Nosicelo Miliso moved out of her landlord’s yard in Bardale and erected a shack in Sondela. Law Enforcement destroyed it three times‚ she claims. She is left with only three blankets and clothes. She works at a vegetable farm near Kuils River. She described how her two primary school children are mocked by their schoolmates because of their poverty. “Now they want to leave school‚” she said.

Malwande Ntanga is a trained but unemployed security guard. He and other residents collect small pieces of corrugated iron sheets and sell them to a scrap dealer in Blackheath. “We bought food with the money we got from the scrap dealer. We eat once a day so that our groceries can last‚” he said.

Ntanga said he doesn’t bathe his whole body anymore because water is scarce. “Most of the time I just wash my face and armpits. Because we don’t have toilets‚ some residents defecate in the bushes while others go to nearby houses.”

Hundreds of residents who invaded a piece of land owned by the Nelson Mandela Bay municipality that has been named “Malema Village” by the invaders ...
News
3 years ago

Government pleads with court to protect state land from invaders

The National Department of Public Works has won a court order to stop land invasions on state property in Vryheid‚ northern KwaZulu-Natal.
News
3 years ago

The situation remained tense but calm in Hermanus on the southern Cape coast on Monday afternoon as protests which followed an attempted land ...
News
3 years ago
Next Article