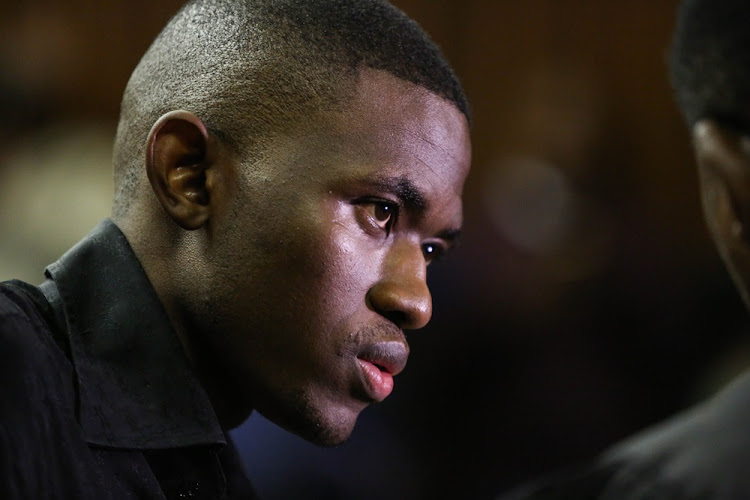 Sandile Mantsoe appears at the South Gauteng High Court for sentencing proceedings on May 3 2018. Mantsoe was found guilty for the murder of his girlfriend Karabo Mokoena.
Image: Alaister Russell/The Sunday Times

In a bid to get a more lenient sentence‚ convicted killer Sandile Mantsoe on Thursday took to the stand in the High Court in Johannesburg where he offered an apology to the family of his slain girlfriend‚ Karabo Mokoena.

While Mantsoe had declined to testify during the trial‚ on Thursday he told the court that he blamed himself for Mokoena’s passing and said he was sorry. "My actions are unjustifiable‚" Mantsoe said.

Sandile Mantsoe, who was found guilty of murdering his girlfriend, Karabo Mokoena, was sentenced to 32 years in prison on May 3 2018.

He repeated he was acting in panic when he destroyed the body of his on-and-off girlfriend. "She was a wonderful person. She was something to the world… I've cleared my conscience on my part…"

Mantsoe‚ a married father of three‚ was estranged from his wife at the time of his relationship with Mokoena.

He told the court that Mokoena had wanted to settle down but because of being hurt before‚ he was reluctant.

On Wednesday‚ Johnson found Mantsoe guilty of assaulting Mokoena‚ killing her and attempting to defeat the ends of justice by destroying her body. Mokoena’s charred remains were found in a ditch in Lyndhurst in April last year.

"I didn't kill her‚" convicted murderer Sandile Mantsoe said of his girlfriend‚ Karabo Mokoena‚ on Wednesday.
News
3 years ago

Mantsoe has maintained that he returned to his apartment to find that she had committed suicide by stabbing herself in the neck. Her family went on a frantic search for her‚ later discovering that the body found in Lyndhurst was hers.

Mantsoe is testifying in a packed court room. Outside court‚ scores of people stood in the passages‚ hoping to get a seat in the courtroom.

Speaking to the media following Mantsoe’s guilty verdict on Wednesday‚ Mokoena’s uncle Tshepo said they could not forgive Mantsoe as he had failed to show any remorse for his actions.

Mokoena said Mantsoe was “a sick‚ sick man”‚ saying he might only understand the magnitude of what he had done once he donned the prison uniform.

Who is the judge behind Mantsoe's conviction?

Karabo Mokoena finally has justice. On Wednesday‚ Sandile Mantsoe was convicted of the assault and murder of his girlfriend‚ Mokoena‚ whose charred ...
News
3 years ago

Karabo Mokoena's alleged killer to know his fate by Wednesday

Karabo Mokoena's alleged killer will know by Wednesday whether or not he will face jail time.
News
3 years ago