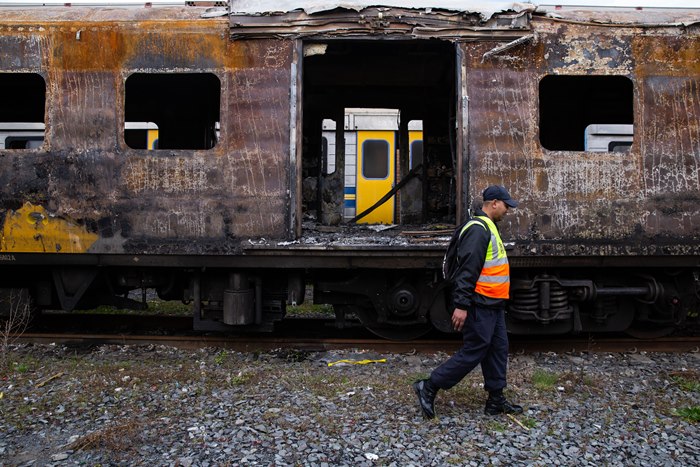 A Metrorail official walks passed a charred train carriage in Cape Town it is one of several carriages damaged in arson attacks
Image: Ashraf Hendricks

#UniteBehind has requested that President Cyril Ramaphosa declare the recent arson attacks on trains in Cape Town a national disaster.

The civil society group‚ in a letter‚ has called on Ramaphosa and government to impose “unified action between the relevant authorities‚ including Passenger Railway Agency of South Africa (Prasa)‚ local and national government‚ SAPS‚ the Directorate for Priority Crime Investigation (Hawks) and the National Prosecuting Authority; for forensic units to find those responsible for acts of sabotage; for daily updates on progress to commuters; and a dedicated monitoring room to track incidents”.

These demands were put in a letter to the President on Tuesday.

This comes after a seat was set alight in a train in Cape Town station on Tuesday morning. A suspect has been arrested. It was the most recent incident in several weeks. A fire on 21 July at Cape Town station destroyed seven rail coaches. Another on 26 July at Retreat destroyed five carriages.

In May‚ a commuter died in a train fire near Ottery station and another woman suffered severe burn wounds. The fires have caused long delays for commuters using an already strained train service.

Cape Town's 100 new railway cops are on the way

Cape Town’s new railway cops will be on duty by the end of September.
News
2 years ago

In its letter‚ #UniteBehind highlighted its #FixOurTrains campaign started in 2017 to remedy “the current crisis” experienced by train commuters daily in the Western Cape. The group believes that the arson attack have been orchestrated to cripple Cape Town’s public transport system.

“These are not random acts of violence‚ but a concerted effort against Cape Town’s public transport system‚ and by extension‚ our economy. Our City and around half a million rail commuters are under attack‚” it said.

#UniteBehind said that no plan had been put forward during a stakeholder meeting with Transport Minister Blade Nzimande on 27 July. “We were all invited to an Imbizo. #UniteBehind refuses to believe that an Imbizo will solve the current crisis. Leadership‚ a plan‚ and decisive action is what is needed‚” it said.

The civil society group has given Ramaphosa until Monday to respond to its demands. However‚ a letter it sent to Ramaphosa’s office in February has yet to be answered.

Police arrested a suspect who attempted to torch a train on Tuesday at Cape Town station.
News
2 years ago

On Wednesday‚ Matthew Hirsch of #UniteBehind said most of the recent train fires appear to be planned and appear to coincide with internal leadership battles at Metrorail. “We don’t believe that these are just frustrated commuters setting carriages alight. There is a more sinister element behind these attacks‚” he said.

Metrorail regional manager Richard Walker said investigations into the fires were still “too premature to speculate” on the reasons for the attacks. Walker added that the modus operandi for these fires was that “they were deliberately set”.

He said that because train fires were classified as malicious damage to property and not arson‚ the consequences for perpetrators were not as severe. “We need to lobby to change legislation so these incidents can be reported as arson. It’s not just a challenge for us‚ but for SAPS as well who also have challenges with prioritising policing certain areas‚” he said.

Asked about #UniteBehind’s call to the President‚ Walker said‚ “We appreciate all the support‚ especially from a civic organisation who works in communities. The more aware communities are about this‚ [the more] they can self-police the system and provide us with intelligence to help catch these perpetrators.”

Mother and daughter 'tormented' by guards over train ticket

Metrorail is investigating the conduct of guards who held a woman and her daughter against their will after a dispute over a train ticket.
News
2 years ago

Transport Minister Blade Nzimande says “elements of serious organised crime” are behind some of the arson attacks on trains in Cape Town.
News
2 years ago