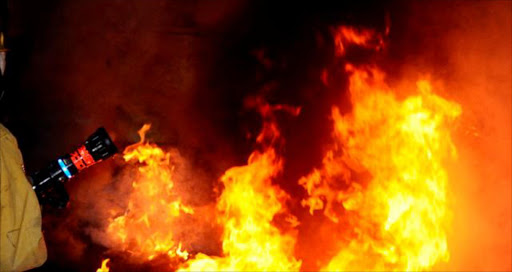 The blaze is said to have displaced a total of 90 people
Image: GENE BLEVINS/REUTERS

Officials are still puzzling over the cause of a fire that killed two people and destroyed 30 shacks in Hangberg‚ Hout Bay‚ in the early hours of Friday.

Two other people had third degree burns and a woman was treated for smoke inhalation.

The blaze displaced a total of 90 people.

“Eight fire engines‚ three water tankers and a rescue vehicle with 48 fire fighters responded to the incident. It took fire fighters just over five hours to bring the fire under control.”

He said the cause of the fire was still unknown.

Hangberg has been the site of protests over delays in the provision of housing. Earlier this month‚ City of Cape Town mayor Patricia de Lille announced a R500-million budget allocation for the 2018/19 financial year for 36 housing developments‚ including one in Hangberg.

Day care centre rebuilt after fire - for the fifth time

In July‚ the Zamani Day Care Centre in Duncan Village‚ East London‚ burnt down for the fifth time.
News
3 years ago

A ten-year-old rescued his mother and two-year-old cousin from a shack fire in which his infant nephew‚ Athaluve Sixakwe‚ died in the early hours of ...
News
3 years ago

A Daveyton teenager who was necklaced in August after community members accused him of being part of a gang that terrorised them has succumbed to his ...
News
3 years ago