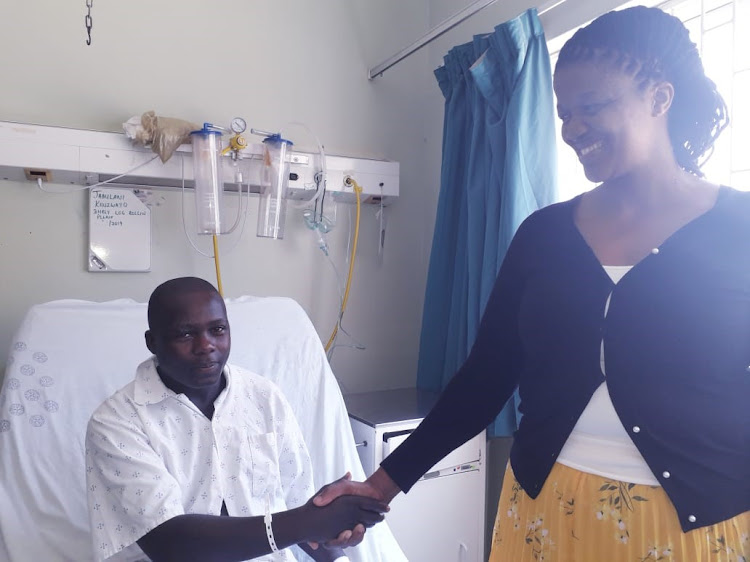 Nkanyiso Xaba risked his life when he pulled patients out of the burning Umphumulo Hospital, north of Durban, on Tuesday. And the 30-year-old security guard says he would do it again, despite collapsing and having to receive treatment for smoke inhalation.

Xaba is employed by a private security firm at the hospital.

As three wards caught alight, he burst in through a window to rescue a nurse and a patient who were trapped in a smoke-filled TB ward.

According to the KwaZulu-Natal health department, a mental healthcare patient reportedly started a fire in the psychiatric seclusion ward.

At the time, there were 16 patients next door in the male medical ward and two in the TB male ward.

The man had been searched to ensure he had no dangerous items in his possession before he was left in the seclusion ward.

But later, while taking a walk to the main gate, Xaba looked back and noticed clouds of smoke emerging from the building he had just left.

“He rushed to the scene and found nurses, doctors, general orderlies trying to remove patients while scrambling to douse the fire, which had turned into a huge blaze,” the KZN health department said.

A fire in a block of flats in Cape Town sparked fears of a towering inferno on Wednesday.
News
2 years ago

Speaking from hospital, via the provincial health department, Xaba said: “I noticed that the fire was spreading from the seclusion ward to the male general and TB wards.

“What became uppermost in my mind was the fact that there were patients on hospital beds who couldn’t walk on their own, so I had to pull them out.

“I told those who could walk on their own to go outside because the ward was on fire.”

Due to fire and smoke, the TB ward was inaccessible through the front door.

“He burst in through the back window to rescue enrolled nursing assistant Fikile Xulu, who was also trying to remove the patient,” the department said. “With the help of security colleagues, nurses and other staff members, the door was forced open and Xaba emerged with both of them.”

As Xaba began to fetch another patient – he doesn’t know how many he helped because “it happened so fast” – he ran into trouble.

“I pulled out the bed with the patient, but when I got out there was just too much smoke. My nose was blocked and I couldn’t breathe through my mouth. That’s when I collapsed,” Xaba said.

For the second time in four years, a luxury Cape Town lodge has been damaged by fire.
News
2 years ago

He was rushed to the casualty ward, where he received medical attention before being transferred to Stanger Hospital.

The mentally disturbed patient was taken to King Dinuzulu Hospital, while nursing staff were sent to the casualty unit for screening and later received counselling.

Xaba, who harboured dreams of being a police officer, said he was proud of what he had done.

“I think I displayed courage. I’m proud of what I did. I would not hesitate to do it again to save lives. If it was another person, I don’t know if they would have done it.”

Health MEC Sibongiseni Dhlomo was moved by what Xaba and other staff members did.

“What this young man has done is unbelievable… Literally putting his life on the line like that to save lives. He helped us avoid a disaster. That is heroism.

“Our Honourable President, Mr Cyril Ramaphosa, always encourages the spirit of #ThumaMina, to say that we should take the initiative… put our country first and do things that will benefit others. What Xaba did on Tuesday is the embodiment of exactly that. We are extremely proud of him, as well as everybody else who helped out during this emergency,” Dhlomo said.

Damage to the wards is still being assessed, the department said.

The families of the three fire fighters who died in the Bank of Lisbon inferno have spoken out.
News
3 years ago

Durban pre-school teacher and mother-of-two Kjersti Skanke's only instinct was to protect the five children on her property when armed men pounced on ...
News
2 years ago