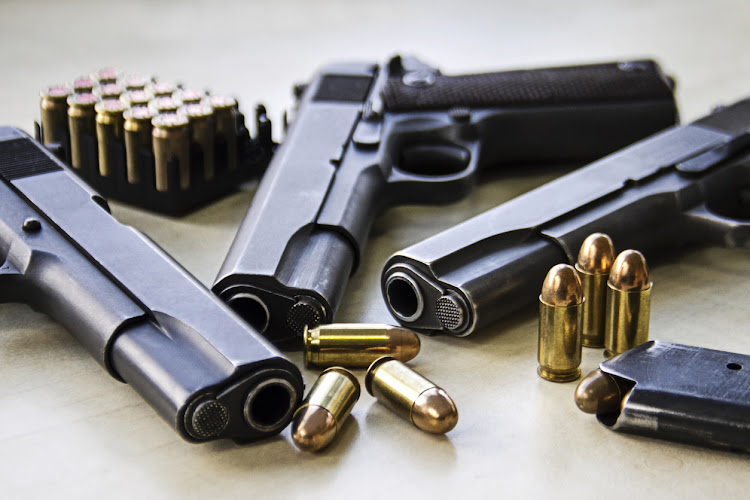 Police in Gauteng have removed 17 firearms from the hands of suspects in the first week of February.
Image: Gallo Images/iStock

Police in Gauteng removed 17 firearms from criminals and apprehended 20 suspects, while three suspects died in shootouts with police during the first week of February.

Police said another man, suspected of being a house robber, was shot dead by a home owner in Bryanston on Thursday evening.

Police said two of the arrested suspects had been posing as members of the police in Johannesburg Central.

When police confronted them and searched their vehicle, they were both found to be in possession of 9mm pistols hanging on the sides of their trousers.

When a homeowner in Bryanston, Sandton, was confronted by four would-be burglars in his house, he exchanged fire with an armed suspect.
News
3 years ago

"Further investigations are continuing as these suspects might be committing crimes and behaving in a manner that portrays police as being corrupt as well as committing serious and violent crimes including business robberies,” police spokesperson Col Lungelo Dlamini said.

Dlamini said in Parkview and Kempton Park, the tracking teams followed information that led to the arrest of three suspects who had allegedly committed a business robbery.

Other firearms that were removed from the criminals in Hercules, Tembisa, Midrand and Bramley included 9mm pistols, a shotgun and .22 rifles.

Inquests dockets have also been opened for three armed criminals who were fatally wouned during ensuing shootouts as they were trying to escape from the police.

No police officers lost their lives in these shootouts.

In the Bryanston incident, Dlamini said the owner of the house had awoken to find four suspects already inside the house.

An unlicensed firearm belonging to the suspects had been seized at the scene.

Police have launched a manhunt for the other three suspects.

"Whenever their lives are in danger, police will not hesitate to fight back and defend themselves and members of the community," Dlamini said.

When a homeowner in Bryanston, Sandton, was confronted by four would-be burglars in his house, he exchanged fire with an armed suspect.
News
3 years ago

Two suspects whom police believe might be linked to serious and violent crimes in Johannesburg’s northern suburbs have been shot dead during a high ...
News
3 years ago

Parliament has called for greater protection of police officers after a fatal shootout with a suspected cash heist gang in northern KwaZulu-Natal on ...
Politics
3 years ago

A bloody shoot-out between police and a gang of alleged cash-in-transit robbers left nine people dead - including two policemen - in northern ...
News
3 years ago