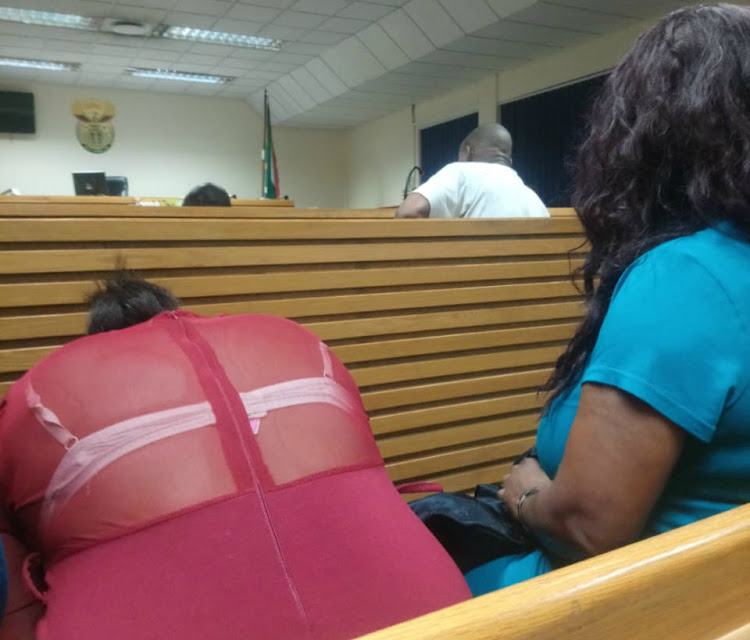 Moses Mavila (in white), who has pleaded guilty to 30 counts of rape, seated in the dock at Pinetown Magistrate's Court on Tuesday.
Image: Orrin Singh

About three dozen women gathered at the Pinetown regional court on Tuesday anticipating the sentencing of a 29-year-old serial rapist, bringing his six-year reign of terror to an end.

Tensions flared and many of the victims broke down outside court after having had to go through the trauma of seeing the man who stripped them of their dignity.

Moses Mavila - dubbed the "Durban highway rapist" for the manner in which he attacked his victims at spots along the busy M19 freeway - was accused of 30 counts of rape committed between 2016 and 2019.

‘I raped in revenge for being raped by my sister.’ Nonsense, says judge

A Randfontein serial rapist who pleaded guilty to all of his crimes has tried to argue the reason he raped or attempted to rape four women was ...
News
2 years ago

Mavila's modus operandi would see unsuspecting women being lured to the Westville and New Germany areas, both west of Durban, with the promise of work.

After raping his victims he would rob them of their belongings.

Mavila, who has pleaded guilty to all charges against him, faces a further 31 counts related to robbery and assault with intent to do grievous bodily harm.

Mavila's sentencing was expected to commence on Tuesday morning, however a number of outstanding documents were needed for the case to proceed. When the case eventually got underway at 2pm, a crowded gallery comprised of victims and their families glared at Mavila as he made his way into the dock.

Many of the victims had previously attended Mavila's appearance in court in order to gain some sort of closure into the vile acts that they had been subjected to.

National head of the SAPS's family violence, child protection and sexual offences unit, Maj-Gen Bafana Linda, was called to the stand as an expert to lead evidence in court.

Linda read out figures for national and provincial cases related to sexual offences committed in the country since 2012.

"It is worth mentioning that our stats are based on the courage of women who walk into police stations to report these crimes."

Linda said that KwaZulu-Natal was only behind Gauteng in the number of recorded sexual offences.

Magistrate Bilkish Asmal then stood the matter down to allow defence attorney Judy Reddy to prepare her submissions for leniency.

At this stage two victims, seated directly behind Mavila hurled insults at him, which were met with further snarls by other women in the gallery.

Mavila then turned around and stared down one of the women, which clearly made her feel uneasy.

Moses Mavila, deemed the "Durban highway rapist" - for the manner in which he attacked his victims at spots along the busy M19 highway - has pleaded guilty to 30 counts of rape he committed between 2016 and 2019. Here he is starring down two of his victims in court @TimesLIVE pic.twitter.com/HygvdeL70n

During her submissions Reddy indicated that Mavila had lost his mother at a tender age and therefore did not value women as he did not have a female figure in his life.

She further noted that he had shown remorse by pleading guilty to all counts he had been charged with and in doing so had not wasted the court's time.

Prosecutor Sizwe Khanyile read out a number of victim impact statements before submitting that Mavila was a "serial rapist who has no place in society".

He requested that the court impose a life sentence and 50 years for robbery, requesting for his sentences to run consecutively as opposed to concurrently.

Magistrate Asmal postponed the matter to July 24 for sentencing.

Police have found the bodies of three more women buried in the backyard of a house in Mpumalanga, after a man confessed to sleeping with them and ...
News
2 years ago

A food delivery driver was due to appear in court on Wednesday after being charged with raping a customer.
News
2 years ago