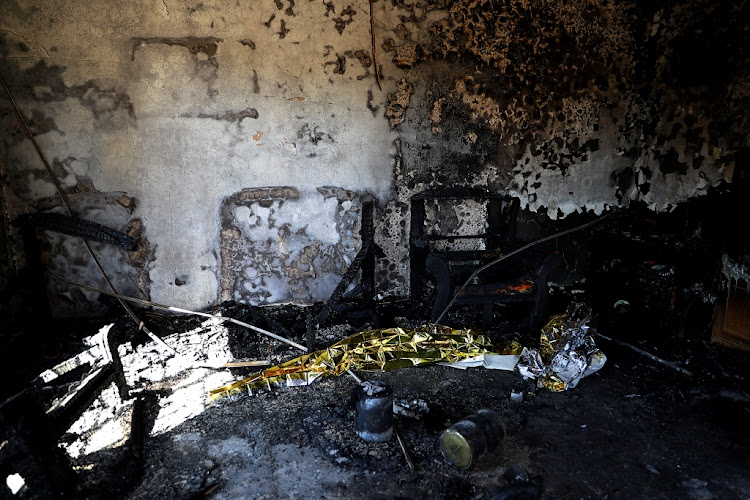 Five people, including three children, were killed in a house fire in Meyerton, near Johannesburg, on Monday.
Image: Alon Skuy

The mood was sombre outside the Meyerton Park home where five people died after a fire broke out on Monday night.

Neighbours arrived in small groups to pay their respects. They spoke of what they witnessed, describing the blaze as "devastating".

Sibongile and Thomas Strauss had been watching television in the lounge with their six-month-old grandson when a fire broke out. Afterwards, only what appeared to be the remnants of a TV and couches were left in the lounge.

Two other grandchildren, aged four and five, had been in separate bedrooms where they inhaled smoke. Unable to open the locked doors of the house, they would breathe their last breaths inside.

A six-month-old baby is among the five people who died on Monday night, when their home was razed by a fire.
News
1 year ago

Screams of “mama, mama” woke a up a neighbour, who went to see what was happening. This was around 8:30pm.

“I heard emotional screams and asked my husband to jump out (of the house) and check what was happening,” said Madeleine Oelfse, a cousin of the deceased, who is also a neighbour.

Oelfse said she and her husband wasted no time and pulled out fire extinguishers and hosepipes when they realised the house was ablaze.

“We called emergency services, took out about three fire extinguishers and a hosepipe, screamed for help and did everything in our power to stop the fire,” she said.

Oelfse could not contain her emotions as she spoke of the ordeal. “We’re devastated because our efforts were not enough to save them … ” she said.

Hannes Steyn of the Midvaal emergency services said paramedics did everything they could to try save the children who were in the bedrooms. But they were unsuccessful, and the children died of smoke inhalation.

A fire which broke out shortly before 9pm on Tuesday completely destroyed three taxis and a truck on a property in Newlands West, outside Durban.
News
1 year ago

Sibongile and the six-month-old grandson were burnt beyond recognition, according to Steyn, who said emergency services sent at least 11 firefighters to the scene.

Community members blamed emergency services for being slow to get to the fire, and said more could have been done to save some family members.

“The team arrived at 8.50pm, seven minutes after a complaint was reported. Efforts to save the children, aged four and five, were unsuccessful as paramedics tried to [resuscitate] the two children, who were found in the bedroom, and a male. The female and child were burnt beyond recognition,” said Steyn.

He said it was unclear what had caused the fire but investigations were under way.

Puleng Dlamini said she was shattered by the loss of the family. “They were good people, always together and a true definition of love,” she recalled.

Dlamini said Sibongile had last visited her on Sunday, but she wasn't home. She hadn't found the time to return the visit. “Had I known that it was the last time she was visiting, I would have rushed to her house … I am really sad. May they rest in peace,” she said.

A scrapyard was destroyed in a fire in Roodepoort, west of Johannesburg, on Saturday night.
News
1 year ago
Next Article