Orlando residents angry at 'dumping' of homeless people in community 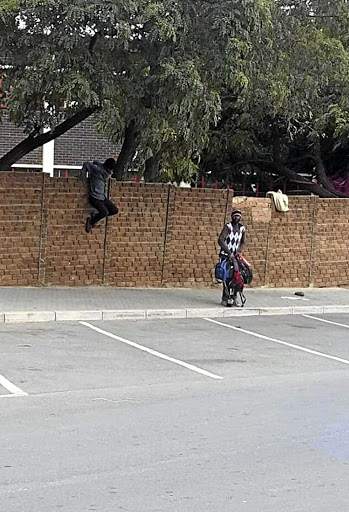 Two homeless people jumping over a wall at the YMCA in Orlando East after being moved there from the city.
Image: SUPPLIED

Residents in Orlando were left infuriated after a group of homeless people  were “dumped” there without adequate food and security.

More than 200 homeless people were moved to the YMCA in Orlando East on Friday night after the start of the national lockdown imposed by President Cyril Ramaphosa.

City of Johannesburg mayor Geoff Makhubo announced that a group of homeless people were to be moved from Braamfontein to Orlando in a bid to curb the spread of coronavirus.

However, residents of Orlando said the city failed to provide the new arrivals with basic necessities such as food and security.

Mduduzi Ngwenya said he was shocked on Saturday morning when a group of about five people went into his home and asked his family for food.

“They knocked on the door and told us they were hungry. They asked for food and said they had been brought to YMCA by the city because of coronavirus. They said they were not given any food since they arrived on Friday night. It's clear they were just dumped here without a plan.”

He said he and his family were initially scared when the group entered their home.

“It's concerning because the president said everyone must be home and that we should not be visiting each other.”

Miriam Shabalala, another resident, said she was concerned by the lack of security at the facility.

“They were jumping over the walls, saying they were better off on the streets because at least they can find something to eat there. But here, they said they were left to die from hunger and that there were no measures to make sure they were taken care of.

“We haven't seen the army since the lockdown and we haven't seen a lot of police officers patrolling the area, so we don't know what will happen if the homeless have the virus and are spreading it.”

Mayoral spokesperson Mlimandlela Ndamase said the City would like to apologise to the community of Orlando East. He said the number of homeless persons grew overnight as word spread they would be accommodating the homeless. “As these growing numbers were not anticipated, this resulted in the shortage of food and other supplies.

“The city has moved the homeless [on Saturday] to various recreational centres.”

'I'm trying to save lives... This is not the time to ask nicely,' says cop
News
2 years ago

Durban's homeless: 'I don't know much about the virus but I know that I am afraid'

Sipho Khuzwayo has roamed free on Durban's streets for 11 years but on Friday, fear of Covid-19 drove him to join a line with hundreds of Durban's ...
News
2 years ago

Cape Town's homeless residents, many of whom rely on the working masses for their daily bread, woke up to empty streets and high anxiety on Friday - ...
News
2 years ago