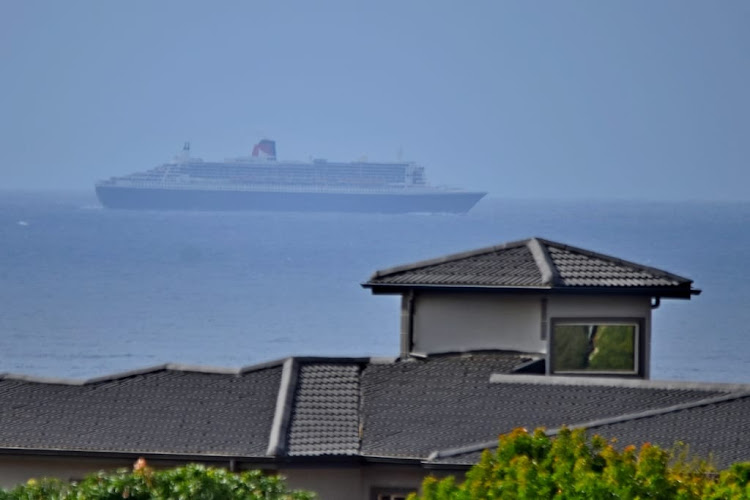 A resident of Widenham Retirement Village took this photograph as the Queen Mary 2 passed through Umkomaas, on the KwaZulu-Natal south coast, just before 10am on Thursday.
Image: Angus Pyke

Transnet National Ports Authority (TNPA) confirmed that the passenger vessel departed from the port of Durban after six South African crew members disembarked from the liner.

The vessel had docked in Durban on Tuesday.

“The ship had been positioned outside the port since Friday after requesting clearance to berth to receive bunkers and stores. Approval was granted on Tuesday by the department of transport and the port health unit of the department of health for the vessel to dock, refuel and allow the six crew members to come ashore,” said TNPA said on Thursday.

Six South African crew aboard luxury liner the Queen Mary 2 will disembark when the vessel is allowed to enter the Durban port.
News
2 years ago

The six South African crew were among 27 individuals on board, including passengers and crew members, who were tested for Covid-19 due to flu-like symptoms or contact with symptomatic individuals on-board.

“The results of all 27 were negative. However, minister of health Dr Zweli Mkhize said the six will be required to self-quarantine for 14 days as a precautionary measure,” said TNPA.

The #QueenMary 2 passenger line has made its way into the port of Durban and is about to dock. On board are 6 SA crew members who all tested negative for the novel #CoronaVirus. They will be subject to another test and 14 days quarantine once they disembark @TimesLIVE pic.twitter.com/J8u5IEGwRe

The ship’s line, Cunard, announced earlier this month that it had ended three international voyages early in response to the coronavirus pandemic. Most passengers were flown home by Cunard earlier during the voyage before arrival in Durban.

TNPA has been working closely with the department of transport, the South African Maritime Safety Authority (Samsa) and the department of health to manage requests from cruise liners after new regulations were promulgated by transport minister Fikile Mbalula on March 18.

“These regulations essentially prohibit cruise liner calls, any crew changes, any disembarkations apart from returning South African citizens or permanent residents, and any embarkations unless they are for departing foreign nationals. However, all parties have worked together to manage individual scenarios,” said TNPA.

Covid-19 tests related to cruise liners in SA to date have included:

Meanwhile, the port of Durban has a final call from the Holland America cruise ship Amsterdam scheduled for Sunday.

“Officials are in communication with the vessel agent and master to determine how this ship will be managed and any measures that need to be put in place,” said TNPA.

Newlyweds Yadira Garza and Joel Gonzalez began their honeymoon cruise on the MS Zaandam with romantic strolls overlooking the sea, but have now spent ...
News
2 years ago