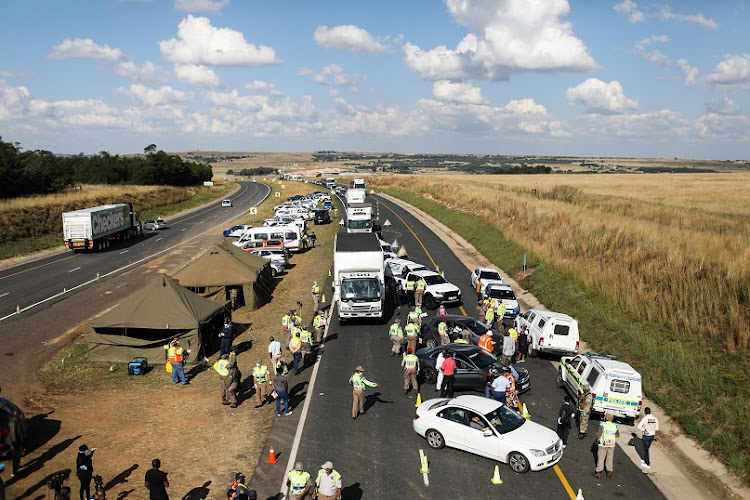 Police pull over cars at a roadblock on the N4 towards Pretoria on Friday last week.
Image: Alaister Russell/The Sunday Times

Many of the lawbreakers bust at various roadblocks in Gauteng during the lockdown had liquor, drugs and unlicensed firearms, provincial police said on Thursday.

Gauteng police commissioner Lt-Gen Elias Mawela told TimesLIVE that more than 15,000 arrests had been made in the province during lockdown.

He was speaking on the sidelines of an operation to crack down on non-compliance with lockdown regulations in Soweto. He was accompanied by community safety MEC Faith Mazibuko.

“We have turned back a lot of vehicles of those who were trying to go to neighbouring provinces without permits. They were issued fines and sent back,” he said.

In many of these cases, he said officers had found drugs, liquor and unlicensed firearms.

In the second week of the lockdown, the number of cars stopped at roadblocks across the country nearly doubled, from 17,559 to 29,738.

Earlier this week, a man was arrested at a roadblock in Gauteng when he attempted to “smuggle” his girlfriend to Mpumalanga. A man was also caught in possession of a SANDF uniform in a JMPD check on Wednesday.

A traffic official and an SANDF member were killed at roadblocks in Gauteng.

Six police officers who were arrested for allegedly stealing R37,900 from a car during a Covid-19 lockdown operation on the old Bronkhorstspruit and ...
News
1 year ago

A 44-year-old taxi owner allegedly behind arranging fake permits to allow  a number of taxis to travel   from the Western Cape to the Eastern Cape ...
News
1 year ago

At least two people were arrested and nine others sent back home at a roadblock on the N4 highway between Mpumalanga and Gauteng on Friday.
News
1 year ago