'Dreadlock man' in uniform bust for impersonating soldier in Gauteng 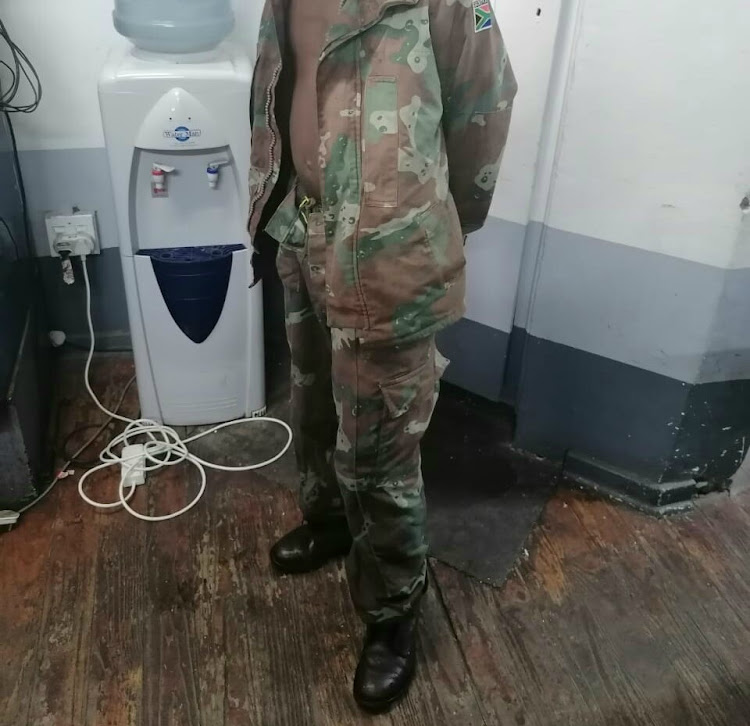 The 25-year-old man was arrested in Heidelberg on Sunday after he was walking about in the streets wearing a full SANDF uniform.
Image: Saps

Five people have been arrested in separate incidents for impersonating a police officer, a soldier and member of the emergency services - complete with flashing lights - Gauteng police said on Monday.

Capt Mavela Masondo said a 25-year-old man was arrested in Heidelberg on Sunday after he was walking about, dressed in a full military uniform.

Community members alerted police about the “dreadlock man” in uniform and he was  arrested shortly afterwards.

In a separate incident in Johannesburg on Sunday, a 40-year-old man was arrested for driving a vehicle fitted with red lights and a siren.

“When stopped, the suspect could not produce proof that he is an emergency services employee. As police were searching the car, they found an unlicensed firearm with ammunition as well as traffic cones belonging to SAPS,” Masondo said.

The man was arrested and charged for impersonating an emergency services employee, possession of unlicensed firearm and ammunition and possession of suspected stolen property.

In Tshwane a former reservist and two of her accomplices were arrested for impersonating police officers and common robbery last week. Police were tipped-off about two women and a man in police uniform who had committed a robbery.

“A lookout for the suspects was conducted. A vehicle matching the description given was spotted and stopped in Soshanguve. Upon questioning the occupants, it was established that one female is a former police reservist while the other female and male were just members of the community,” Masondo said.

Police recovered a SAPS uniform, a police docket, trays of eggs and chickens.

“It is a very serious offence to impersonate a law enforcement officer.

“These suspects deserve a hefty sentence that will send a strong message to other criminals who tarnish the names of the hard working law enforcers and emergency service employees,” provincial commissioner LT-Gen Elias Mawela said.

Zandspruit man charged for 'walking around' in army jacket

A man who casually walked around in a defence force jacket in Zandspruit, Johannesburg, has been arrested
News
2 years ago

While streaming services have become the go-to source of entertainment for many people during the national lockdown, hackers are creating counterfeit ...
News
2 years ago

A person impersonating a security guard pulled out a gun and set in motion a brazen daylight robbery in which 12 Ford vehicles were stolen in one ...
News
2 years ago