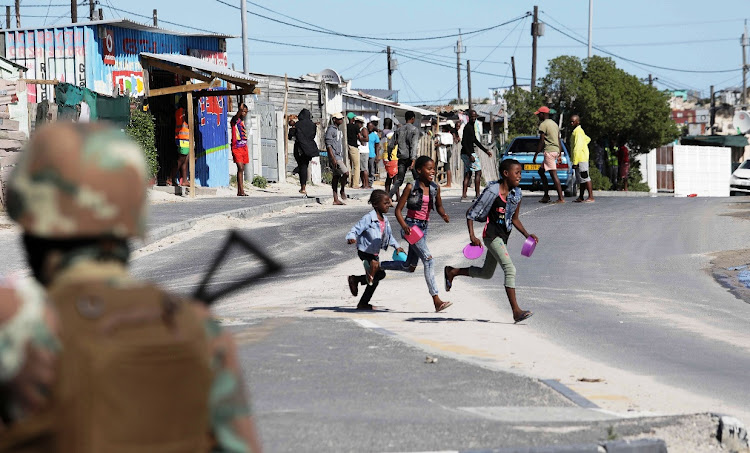 The streets of Khayelitsha, in Cape Town, remain busy despite the lockdown and pleas by politicians for people to stay inside.
Image: Esa Alexander

Western Cape premier Alan Winde says he has started waking up in a cold panic at 2.30am.

What seemed like a nightmare a few months ago is now reality. New infections in Cape Town’s crowded townships increased by up to 173% last week, and in some cases shot up by well over 20% a day.

The Western Cape now has about 45% of SA’s confirmed Covid-19 cases and deaths.

But there was little sign of lockdown on the streets of Khayelitsha, Nyanga and Langa. The same applied in Gauteng and KwaZulu-Natal townships, where many people said lockdown was impossible, and complained about a lack of information on the coronavirus.

Screening and testing across the country is detecting multiple infection hot spots, resulting in the closure of shops, offices, factories and police stations.

A new online dashboard shows the Western Cape had 2,371 confirmed Covid-19 cases and 46 deaths by 1pm on Thursday.
News
2 years ago

Winde said there are more than 40 such “bush fires” in the Western Cape, which had reported 3,113 infections and 58 deaths by 1pm on Sunday.

“I wake up most nights at 2.30am and I go and read more, just as our doctors are doing,” Winde said. “In some ways it is super scary — I know what is coming.”

Projections forecast 80,000 infections in the Western Cape. “I ask myself is this Custer’s last stand,” Winde said of his battle against the invisible enemy, which has killed more than 240,000 people worldwide and more than 120 in SA.

Last week, 12,510 Covid-19 tests were conducted in the Western Cape, up from 9,000 the week before. Contact-tracing teams were fanning out across the province, said Winde, resulting in more accurate testing — and possibly accounting for the province’s higher caseload.

The upsurge in testing has largely confirmed what epidemiologists have suspected for some time — that the virus is firmly entrenched and spreading fast.

“To control and isolate people who have the virus is really difficult now,” said Prof Mark Cotton, head of paediatric infection at Tygerberg Hospital in Cape Town.

Khayelitsha Covid-19 cases leap by 21% in a day, says Winde

Covid-19 is strengthening its grip on the Cape Town township of Khayelitsha, where cases have leapt by more than 21% in a day.
News
2 years ago

“Despite the lockdown, the numbers are going up all the time. That is a worry. And it is established in high-density areas like Khayelitsha and Gugulethu, where people have less resources to isolate and wash their hands.

“Along the way, more and more people are going to get sick. I am exceptionally concerned and worried about what is coming.”

Friday’s easing of the lockdown to level 4 brought thousands of people onto the streets between 6am and 9am, when exercise is permitted outdoors under the regulations. Many of them were not wearing masks, which is now obligatory in public.

On the Cape Flats there appeared to be widespread apathy among residents, and ward councillors warned that without a massive attitude shift, Cape Town would be sitting on a powder keg.

Makazukiswe Mnqika, who stood in a snaking queue at Khayelitsha’s Site C Plaza, said he was there to deposit money for rent. “I have a mask at home but I forgot it because I was in hurry,” he said.

“I am aware of the increasing number of Covid-19 cases in Khayelitsha but we have no choice ... My landlord has been pestering me, so I had come out. I am just hoping that I don’t get the virus.” 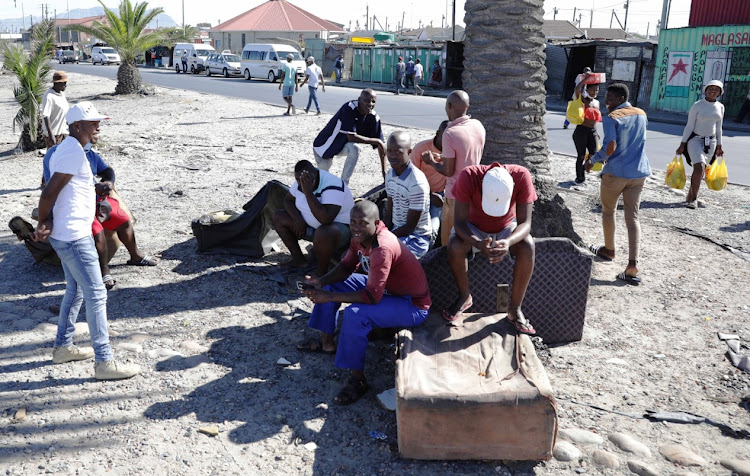 Ntsikelelo Giqi sat on a discarded sofa under a tree in Site C. He was surrounded by 10 other men, some of them taxi drivers waiting for their vehicles to be washed.

“We heard on TV that the figures are increasing,” said Giqi. “We tried to stay indoors but it’s very difficult. We started coming out after the president announced that the country is moving to level 4.

“We don’t have yards, it’s one shack on top of the other. Our areas are dirty and smelly. This is the only place we have where we can sit and relax.”

Nosimo Lindani, who was out shopping, blamed the increase in cases on a lack of masks. “The government must provide us with masks and sanitisers,” she said.

Nyanga ANC councillor Khaya Yozi said there was a lack of enforcement. “It’s as if there was no lockdown in these areas. I think we have a long way to go as a country. We can attribute the people’s apathy to lack of education. Some of the reasons they are making don’t hold water,” he said.

“They are complaining that they are unemployed and yet everyone, even the employed, has to stay at home. We have brought testing centres close to the people, but we are worried as leaders. People really have to use their consciences and stop the excuses.” 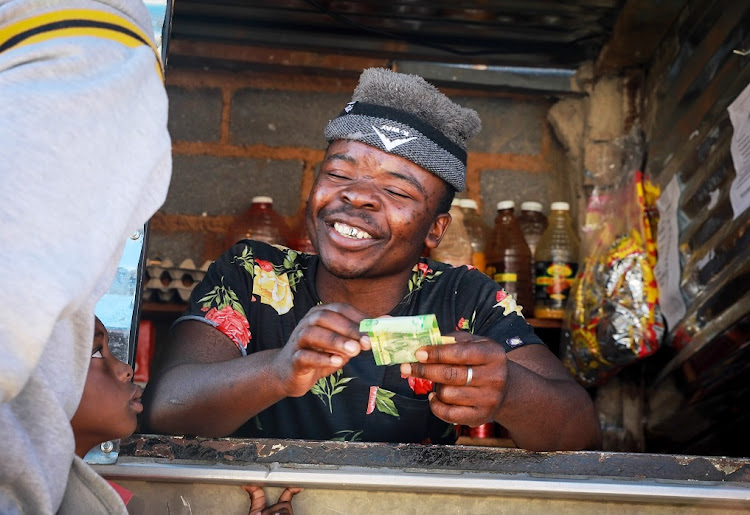 In Johannesburg, Alexandra was a similar picture of widespread apathy last week. By Friday, it had 259 of the city’s 828 confirmed Covid-19 cases.

Duncan Mabunda said the lockdown has reduced sales at his roadside hot food stall by 40%. Admitting he was breaking lockdown regulations, Mabunda said he had no choice. “I have a two-month-old baby. I need to buy formula and nappies, the mother is unemployed and I’m the breadwinner.” 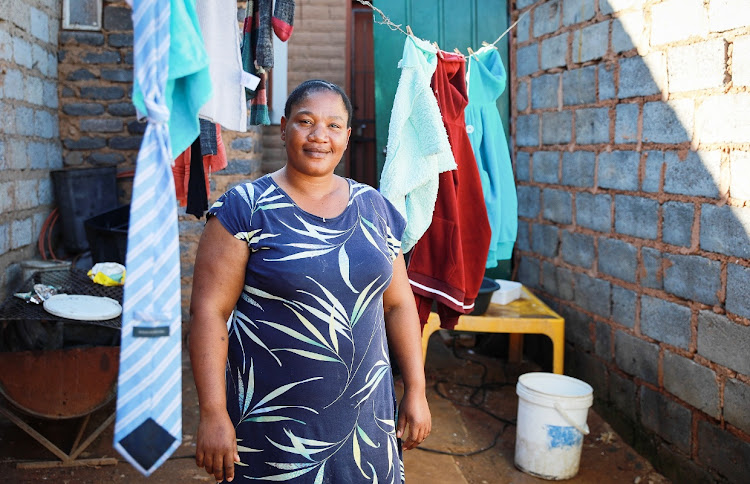 Alexandra hawker Mookho Makara said her neighbours are acting as if they are immune to Covid-19.
Image: Sebabatso Mosamo

Hawker Mookho Makara, who lost her income during the lockdown, said her neighbours are acting as if they are immune to Covid-19.

“You can see that people here have told themselves that they will live their lives the way that they want to and the government will not say anything,” she said.

There were few signs of lockdown enforcement in the area near Alex Mall. A Joburg Metro Police vehicle drove past groups of people on 4th Avenue without stopping.

On 9th Avenue, Michael Sibanda and his friends said there is no point staying indoors. “I heard everyone will get the virus anyway. Staying home will then not help anyway and in the end at some point we will all die,” said Sibanda. 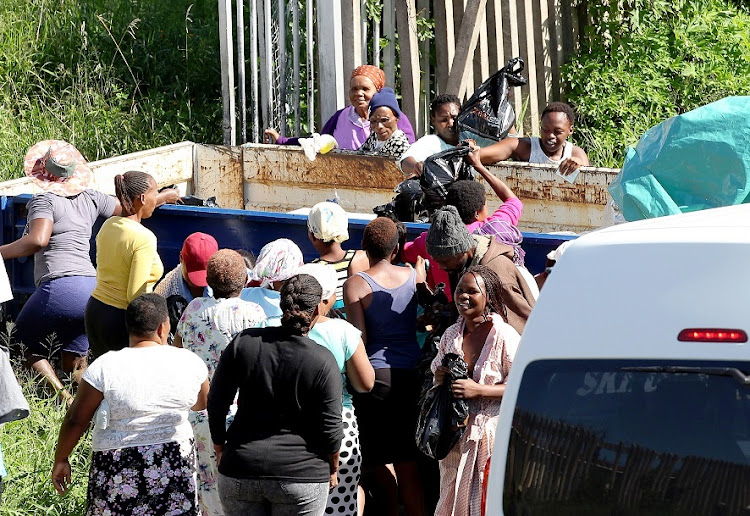 In KwaZulu-Natal, the Covid-19 epicentre is eThekwini, where in Umlazi’s E section on Thursday hundreds of residents shoved each other as they swarmed around a food parcel truck.

Two members of the crowd, Nokwanda Mpanza and Thulile Shozi, were not fazed by close proximity to other people. “We don’t have food, why must we worry about masks?” said Mpanza.

The Gauteng and Western Cape provincial governments release daily infection numbers for municipalities, but the KwaZulu-Natal government said it is not doing so for fear of stigmatising areas with high infection rates.

Spokesperson Mthatheni Mabaso said: “The current approach ... is an effort to be responsible and avoid unintended consequences. As the stigma level drops, details with specific areas will be released.”

At the beginning of the week, Angela Bukubuk, 61, heard from friends that her pension would be paid only tomorrow.
News
2 years ago

Thuli, 10, explained how she spends her days in lockdown at home in Dumbe Street, Tsakane, Ekurhuleni.
News
2 years ago