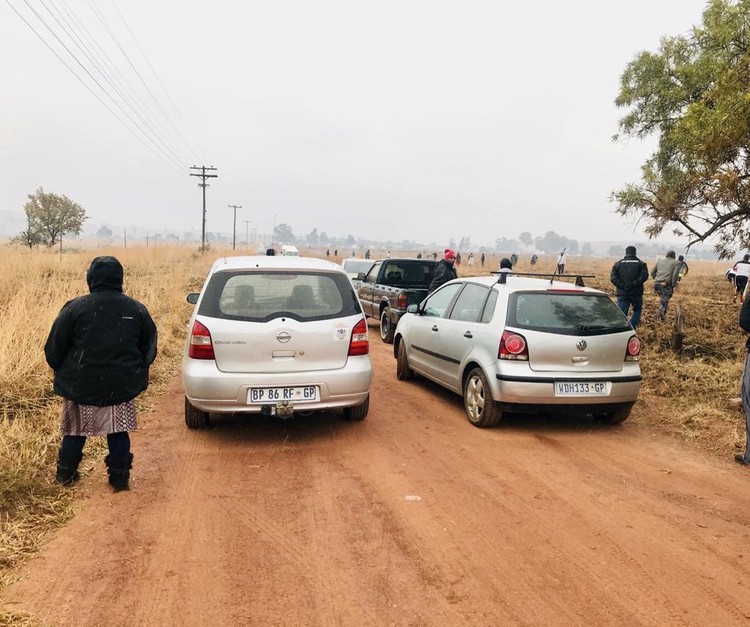 On Friday, dozens of cars drove to Walkerville, Midvaal, where people paid R250 for the “right” to occupy private land.
Image: Kimberly Mutandiro/GroundUp

Some private agricultural landowners in Walkerville, Midvaal, say they have been subjected to assault and threats to their families by a group of men who call themselves the Big Six and stage land occupations.

Hundreds of desperate people have moved onto private land after they were sold plots. The Red Ants with Johannesburg metro police (JMPD) have demolished shacks, but the occupiers refuse to leave.

On Friday, the North Gauteng High Court granted an eviction order. After shack demolitions on Sunday, occupiers returned and, according to a land owner, tried to set some houses on fire.

One of the landowners, Clinton Gruar, said the past three weeks have been a nightmare.

“We just woke up and saw land invaders helping themselves to our land. They broke plot fences and began allocating people portions of our land. When we asked what they were doing they threatened to fight us if we try to remove them,” he said.

“They have been protesting, blocking roads, and denying us access to the invaded area. They even tried to set some houses on fire. Residents have been assaulted and threatened; they are fearing for their lives,” said Gruar.

Hundreds of people have flocked onto private land in Midvaal.

They each paid a “donation” of R250 to a group of men leading the occupation who call themselves the Big Six.

The Big Six say they will use the money to legally protect the occupation.

The legal owners of the land say they have been threatened and fear for their families’ safety.

On Friday, dozens of cars were seen driving into the area. Food was being sold and some people were buying zinc sheets from the men in charge of land allocations.

People told GroundUp word had gone around that land was up for grabs for a “donation” of R250.

Some adverts were even posted on social media alerting people to come in their numbers and buy land.

They said the land allocators had promised them legal protection and that the land would not be taken from them.

A man who gave his name as Letho Masoka said he was the founder of the land occupations together with five other people. They called themselves the Big Six.

“We are allocating the land to our people who desperately need it. The land is for free, but we are merely asking for donations of R250 so that we can pay for legal representation to claim this land. By occupying the land all the crime which was being committed here will stop,” said Masoka.

He said over 1,000 people had bought in and were coming from places such as Nelspruit, Soweto, Orange Farm and Vlakfontein.

“This is not a land grab, invasion or occupation. We as the community are taking back what belongs to us,” he said.

Masoka said he and his partners would start a “world war” if anyone tried to stop the invasions.

Kateko Maluleka from Vlakfontein said: “I bought a piece of land here because l am tired of renting. Ever since l came from my rural home in Giyani l have been renting. Rentals around here are expensive. By getting land l will save a lot of money as l have children.”

She said the people she bought the land from promised her that the occupiers would soon have electricity and water.

Khensani Chauke said she doubted that the project was genuine, but she just took a chance out of desperation. “My husband and l just paid because we desperately need it.”

She said they had once bought a piece of land in Snake Park near Soweto before they were evicted by the Red Ants. They then rented a place in Vlakfontein.

“Losing this land would be painful because the people who sold it to us told us that everything would be fine,” said Chauke.

Midvaal Mayco member for development planning and human settlements Mokete Motsamai said that on June 7 he received reports that a land occupation was under way. “Even though we deployed Red Ants to demolish shacks two weeks ago the people refused to leave the land. They have been making excuses that our office has allowed them to continue with land allocations which is not true. We even met with them and told them to stop land allocations. On June 19 we obtained a court order which stated that the invaders were to vacate the land within 72 hours. We have deployed the JMPD to act on the order. We will do everything in our power to remove them.”

Midvaal mayor Bongani Baloyi has a solution to the water crisis

Gauteng recently experienced heavy rains and flooding, and the Midvaal mayor says this water is being wasted.
News
2 years ago

You are more likely to die in Walkerville, most likely to be unemployed in Heidelberg

The Midvaal municipality scored highest among the nine Gauteng municipalities that were audited by AfriForum.
News
3 years ago