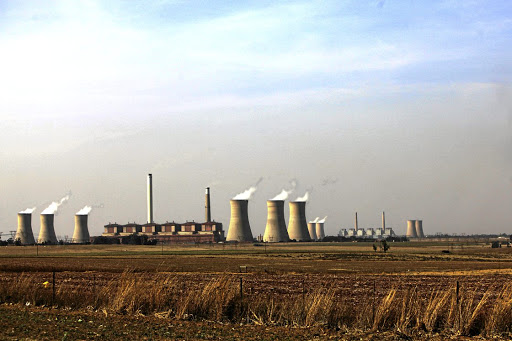 Power stations such as Matla and Kriel in Mpumalanga are significant contributors to air pollution in SA. Legal pressure on the government to tackle the problem is set to mount as a senior UN watchdog enters the fray.
Image: Alaister Russell

Senior government ministers have gone to great lengths in recent months defending South Africa’s globally unique ban on smoking cigarettes during the Covid-19 pandemic. The same government and its cabinet has for years ignored calls to do something about power plants’ voluminous and toxic clouds of soot, smoke and poisons inhaled daily by many people on the Mpumalanga highveld.

Co-operative governance & traditional affairs minister Nkosazana Dlamini-Zuma has been particularly vociferous in championing the tobacco ban, arguing that the state has a constitutional duty to safeguard public health.

But how about defending public health when threatened by big industry’s fumes and poison?

According to a government air quality management plan for the area, annual air pollution volumes in the region include at least: 1,633,655 tons of sulphur dioxide (SO2), 279,630 tons of fine particulate matter (PM10) and 978,781 tons of nitrogen oxides (NOx) - emanating from Eskom power stations, metal factories, coal mines, brick makers, the petrochemical industry and several other heavy industrial operations.

On Monday , however, legal pressure on the government to tackle one of “the deadliest environmental problems in the world today” began to mount when a senior United Nations human rights watchdog lodged an unopposed application in the Pretoria high court.

Environmental justice group groundWork and a Mpumalanga community organisation have launched a court application in which they demand that government ...
News
3 years ago

David Boyd, the UN special rapporteur on human rights and the environment, will seek permission to become amicus curiae (friend of the court) and provide expert evidence in a landmark court case on air pollution and human health initiated by the environmental justice group groundWork and the Vukani Environmental Justice Alliance.

Boyd, who is based at the University of British Columbia, is also one of Canada’s leading experts in environmental law and policy and an internationally renowned authority on the relationship between human rights and environmental degradation.

He has acted as a special adviser on sustainability to Canadian Prime Minister Paul Martin; is a member of the World Commission on Environmental Law; an expert adviser for the UN’s Harmony with Nature Initiative and a member of ELAW, the Environmental Law Alliance Worldwide.

In his role as special rapporteur, he has a duty to advocate for the protection of human rights and the right to breathe clean air, he says.

“I seek to intervene as amicus curiae in these proceedings to assist the court in its interpretation of the right to an environment that is not harmful to health or wellbeing, and the obligations of the state under international law,” he says, noting that a significant body of scientific literature shows that the burden of poor air quality falls disproportionately on the shoulders of marginalised and vulnerable communities.

In court papers submitted through Lawyers for Human Rights, Boyd argues that pollution in parts of Mpumalanga is “among the highest in the world”, rendering this court case a human rights issue of global importance.

He will also cite evidence that as many as 19,410 people were estimated to have died in South Africa in 2017 due to outdoor air pollution – a death rate that is roughly eight times higher than the current number of deaths from Covid-19 in SA.

Boyd argues that poor people, young people and the elderly are especially vulnerable to the deadly impacts of air pollution.

Citing a World Health Organisation (WHO) report on children’s health and the environment, Boyd says air pollution can cause a range of devastating health damage such as heart disease, lung cancer, premature birth, childhood obesity, reduced intelligence and a variety of neurological disorders in children and adults.

“Air pollution that exceeds acceptable standards affects everyone, causing widespread violations of the right to live in a healthy environment. Yet the burden of disease caused by air pollution is inequitably distributed, with certain vulnerable populations bearing a disproportionate share of the impacts.

“Among the most severely harmed are children, people living in poverty, women, elderly persons and people with pre-existing health conditions such as respiratory conditions or heart disease.

“Poverty also exacerbates the impacts of air pollution through lack of access to information, limited access to affordable health care and a lack of political power to demand remedial action.”

The air is cleaner with a third of the global population on lockdown, but South Africans who use solid fuel to cook and heat their homes could face a ...
News
2 years ago

He describes very fine particulate air pollution (PM) as one of the single largest risks to human health, because such tiny particles of soot, black carbon, nitrates and heavy metals can be inhaled deep into the lungs and then pass into the bloodstream.

Boyd says a study published by the independent Boston-based Health Effects Institute calculates that air pollution causes the loss of 617,500 disability-adjusted life years (DALYs) each year in SA. A DALY is a metric that measures the years of healthy life lost and is widely used to identify the magnitude of illness caused by a particular risk factor.

Based on separate evidence to be presented by international air pollution experts, Peter Orris and Mike Holland, the UN Special Rapporteur believes it is likely that a substantial proportion of these health losses occur in the Highveld Priority Area (HPA). Declared officially in 2007, the boundaries of the HPA spans an area of 31,106km2 and includes parts of Gauteng and Mpumalanga.

Not all air pollution, he says, violates the right to a healthy environment.

“The right does not entitle rights-holders to pristine air quality. However, if air quality fails to meet established air quality standards, it is a prima facie violation of the right to a healthy environment.”

Boyd says states have several obligations under international law and they cannot violate people’s right to breathe clean air and, therefore, have a duty to ensure that this right is not violated by big industries.

In the application, Boyd sets out seven key steps he believes every country should take to ensure healthy air. SA falls short in most.

“There is no doubt,” he concludes, “that air pollution is the deadliest environmental problem in the world today, causing millions of deaths annually ... The longstanding failure of a government to improve air quality, especially when it has failed to act with the requisite urgency in the face of long-term exceedances of national air quality standards, is a violation of the right to health environment.”

As part of the main application, groundWork director Sven “Bobby” Peek argues that the levels of outdoor air pollution in the HPA are harmful to human health and that current and former government ministers responsible for environmental affairs have failed to prescribe regulations to reverse poor air quality in this area.

Peek argues that there has been a history of broken promises by national and local governments in addressing air pollution in the affected areas.

Timothy Lloyd, an attorney at the Centre for Environmental Rights, says groundWork and the government are still in the process of exchanging court affidavits, so a hearing date for the main application has yet to be set down.

Perhaps after the hearing, the government will take action and treat this matter as urgently as the cigarette ban was enforced. It has a duty to safeguard public health.

University of Pretoria (UP) academic Prof Matthys Dippenaar has appealed to municipalities to monitor groundwater close to cemeteries, as tens of ...
News
2 years ago

More than 1,300 items of litter a day on Cape beaches - during hard lockdown

The scourge of plastic and cigarette butts continues to plague Cape Town's beaches, even in the absence of people during the toughest levels of the ...
News
2 years ago