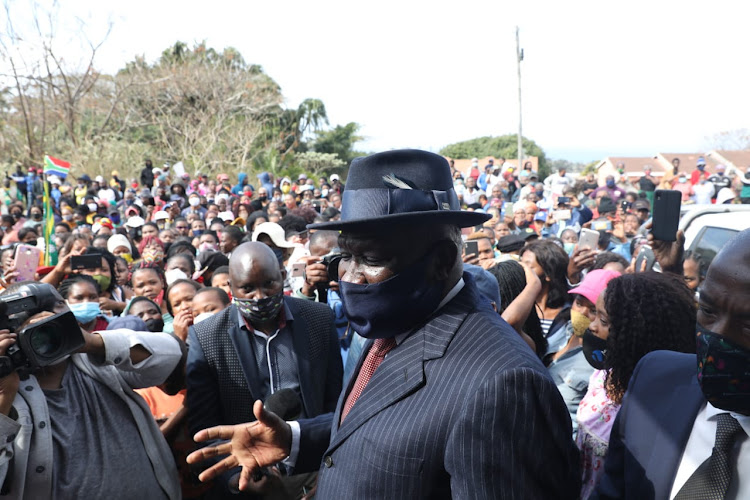 Police minister Bheki Cele addresses a gathering outside the Umzumbe magistrate's court on Monday. He said one of two suspects had 'committed suicide' and there were concerns about more victims.
Image: Sandile Ndlovu

The Independent Police Investigative Directorate (Ipid) has been tasked with investigating the death of a man believed to be the main suspect in the murders of five women in Mtwalume on the KwaZulu-Natal south coast, who died in police custody early on Monday morning.

Siphamandla Khomo, 41, who was found hanging in a cell in Scottsburgh in an apparent suicide, was one of two men who were due to appear in the Umzumbe magistrate's court on Monday. This followed the deaths of Akhona Gumede, 25, Nosipho Gumede, 16, Neliswe Dube, 22, Zama Chiliza, 38, and an unidentified woman in her 20s who died between April and last week.

In a statement, Ipid said: “It is alleged that the deceased hanged himself with a string from his track[suit] pants. The detained was arrested, as he was a suspect in a Hibberdene 5 counts of murder case, and he was detained at Scottburgh SAPS from August 13.

“Yesterday, he was booked out for confession procedure, and the normal process of having a suspect medically checked before and after was adhered to. He was returned into the cell just after midnight. As the night shift was handing over to the day shift, the deceased was found hanging from the shower head. The paramedics and later the pathologist declared him dead on the scene,” Ipid said.

Police minister Bheki Cele said Khomo had already “confessed to the murders” and was due to point out additional crime scenes on Monday.

Cele said a total of 14 people had been reported missing but the details of their disappearances needed clarity.

Police minister Bheki Cele has confirmed that one of the two men arrested in connection with the #MthwalumeMurders has died and that the other has been released due to insufficient evidence against him @TimesLIVE @yasantha pic.twitter.com/xmnV3e1Fs2

“He has confessed to the murders. In one instance there was a T-shirt, which the family of the deceased confirmed, that was found in his house,” said Cele.

“Yesterday [Sunday] he took police and showed them where he had dumped their bodies,” he told a crowd that had gathered outside the court.

“Khomo's death weakened our case because with the deceased we had a very strong case and all dockets against him, but the second guy was only linked with information from the deceased. The prosecution has told us that the case is too weak to enrol,” said Cele.

When asked if the second suspect had been released, Cele said that was the recommendation by the NPA, however he would remain a person of interest.

National Prosecuting Authority spokesperson Natasha Kara said the case against the second man had not been enrolled because there was insufficient evidence.

“The chief prosecutor of that cluster, Jabulani Cebekhulu was instructed by the DPP KwaZulu-Natal, advocate Zungu, to study the dockets in conjunction with the SAPS investigating team.

“On studying the docket, he decided that there was a case against one of the suspects and insufficient evidence against the other. It was brought to our attention that the suspect who was supposed to appear in court this morning, passed away in police custody,” she said.

The family of one of the dead women wept outside court when they learnt of the outcome. They were too emotional to speak to media.

The dock at the Umzumbe magistrate's court was empty on Monday after the remaining suspect arrested in connection with the deaths of five women, ...
News
1 year ago

One of two men due to appear in court on Monday morning in connection with the deaths of five women on the KwaZulu-Natal south coast has died.
News
1 year ago