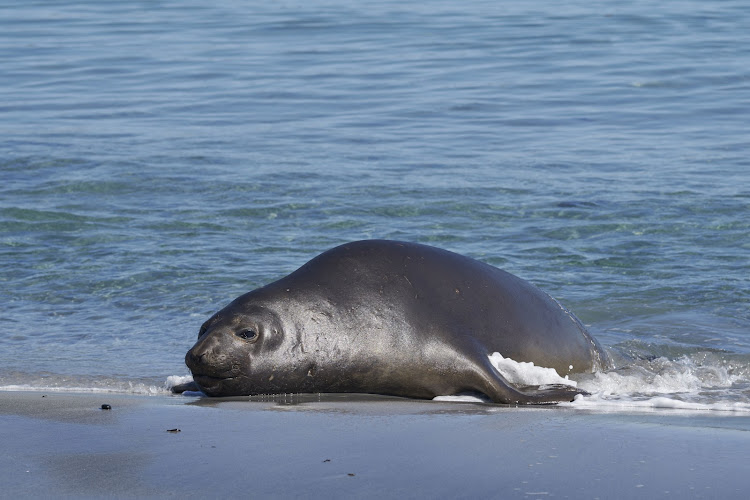 A 12-year-old boy stood guard over a seal that was stranded at Silver Beach on the KZN south coast on Sunday. Stock image.
Image: 123RF/Jeremy Richards

A 12-year-old boy kept watch over a stranded elephant seal at a beach on the KwaZulu-Natal south coast to protect it from other children who were harassing the marine animal.

Tokkie Livingstone of the National Sea Rescue Institute (NSRI) in Port Edward said a team was dispatched on Sunday afternoon after a seal, which they named Buddy, was spotted on Silver Beach.

“NSRI crew responded to the scene where a local man, his wife and son were guarding what was discovered to be a juvenile elephant seal,” he said.

Livingstone said 12-year-old Seth Gurr, a pupil at Port Edward Primary, had insisted on guarding the seal to protect it from other children who had chased it into the water after it had beached.

“The elephant seal was being pounded by waves in the surfline and reached the beach before some children on the beach corralled the seal back into the water, where it appeared to struggle in the water for some time before coming back to the beach, where it was then guarded by Seth and his parents Archie and Mandi.”

He said a team, including private security officers and wildlife rangers, had arranged to watch over the seal through the night in shifts.

Plans were also put into place to either move the seal to a local nature reserve or to uShaka Marine World in Durban.

However, during the early hours of Monday morning the seal returned to the water and swam away.

Livingstone praised Seth and his parents for their commitment in ensuring the seal's safety.

An Indian crewman was airlifted from a crude oil tanker off the coast of Port Elizabeth after suffering a serious injury on Friday.
News
1 year ago

How UWC's feral cats are keeping all nine lives during lockdown

When the UWC Feral Cat Project (Tufcat) started more than 20 years ago, there were hundreds of starving, sick and unsterilised cats on campus.
News
1 year ago

An injured humpback whale was euthanised on Wednesday night after washing up on Maphelane beach, near the KwaZulu-Natal tourist town of St Lucia
News
1 year ago