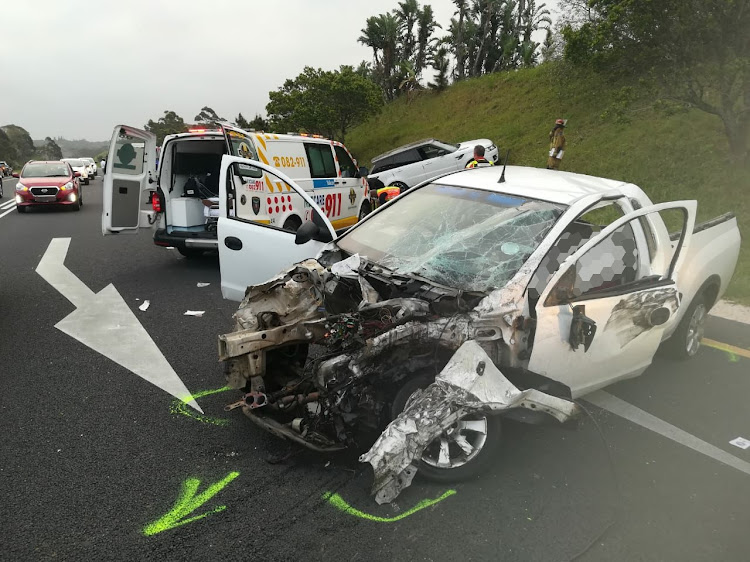 Four vehicles were involved in the deadly crash on the N2 near Ramsgate
Image: supplied by Netcare 911

Five people were killed in a multi-vehicle collision on the N2 near Ramsgate on the KwaZulu-Natal south coast on Saturday afternoon.

Netcare 911 spokesperson Shawn Herbst said the paramedic service responded to the crash at around 5pm.

“Reports from the scene indicate that four vehicles were involved in a collision. Medics assessed the scene and found that four people had sustained fatal injuries and were declared deceased on the scene,” he said.

“The injured patients were treated on scene and once stabilised were transported by various ambulance services to hospital for further treatment,” Herbst said.

“At hospital one of the critically injured patients deteriorated, and despite the efforts of the doctors, the patient was declared dead. The cause of the collision is not known but authorities are investigating,” it said.

Unborn baby among 13 killed in horrific truck and taxi crash

Thirteen people, including an unborn baby, have been killed in a horrific head-on collision between a taxi and a truck on the R34 between Ulundi and ...
News
1 year ago

Two trucks collided head-on in an accident on the N1 between Beaufort West and Three Sisters in the early hours on Wednesday.
News
1 year ago