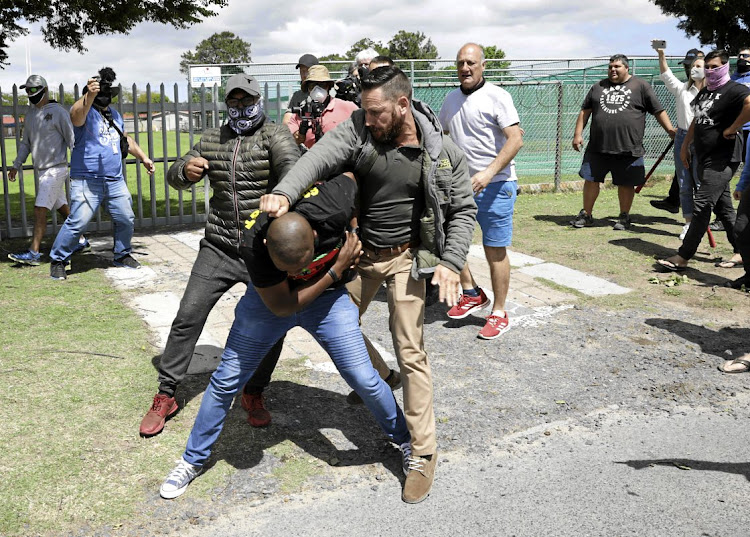 Parents of pupils and residents clashed with EFF members at Brackenfell High School after reports of alleged racism at the institution.
Image: Esa Alexander

The EFF says its “ground forces” are ready to protest against alleged racism outside  Brackenfell High School in Cape Town on Friday.

On Wednesday morning it reiterated that its supporters from the Western Cape would demonstrate outside the school, saying “no one will control the movement of black people and dictate where we can and cannot go”.

This comes after EFF leaders Julius Malema, Mbuyiseni Ndlozi and Floyd Shivambu announced on Monday that the party would protest. The announcement saw mixed responses, with some criticising the demonstrations taking place amid school exams. Others expressed support and hailed the party for “representing black South Africans”.

Brackenfell High School made headlines earlier this month when the Sunday Times Daily reported that a group of parents hosted a private, unofficial matric ball which was allegedly exclusively attended by white pupils. The school had cancelled its official event due to the Covid-19 pandemic.

A parent, who spoke to the publication on condition of anonymity, said the event was not intended to be exclusionary, and that parents had forked out R500 per pupil.

Violent scenes unfolded outside the school last week when angry residents and parents confronted EFF protesters, drawing condemnation from the provincial department of education and the SA Human Rights Commission (SAHRC). The red berets have maintained that their demonstration was peaceful.

The EFF will march on Brackenfell High in Cape Town this Friday.
Politics
1 year ago

She answers criticism that the DA, by comparing EFF members at Brackenfell High to Nazis, overstepped the mark
Politics
1 year ago

DA federal council chairperson Helen Zille blames the failure to secure by-election seats in Gauteng on coalitions with the EFF.
Politics
1 year ago