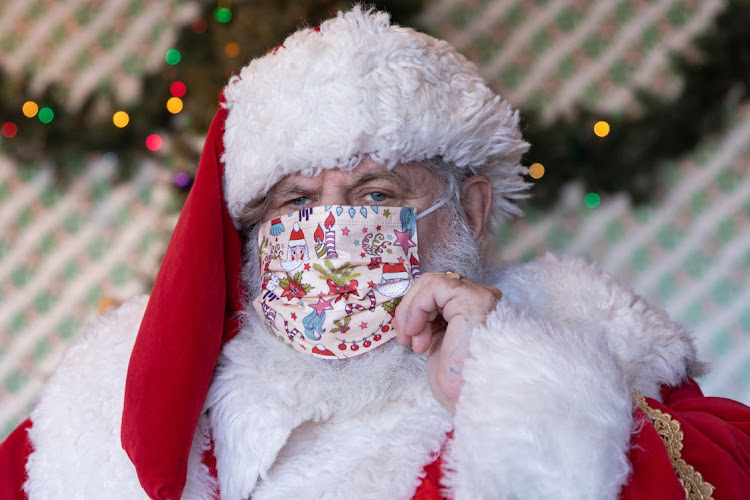 Dana Friedman, a trial lawyer who has spent 6 months of each year growing out his beard for his annual appearances as Santa Claus since 2001, adjusts his mask before greeting a child at the Bay Terrace Shopping Center in Queens as the global outbreak of the coronavirus disease (Covid-19) continues, in New York City, US, December 6, 2020.
Image: REUTERS/Caitlin Ochs

SA recorded 3,313 new cases of Covid-19 in the past 24 hours but it is the positivity rate of 17% that will be of biggest concern.

According to health minister Dr Zweli Mkhize, the new infections came from just 19,252 tests done in the past 24 hours.

The new cases take the total number of confirmed infections to 817,878.

Still hope to prevent Rage-based second wave, but only if contract tracing and quarantine happens

One of SA's leading health experts in the fight against Covid-19, Prof Salim Abdool Karim, says that if KZN officials quickly trace and quarantine those who attended the 2020 Ballito Rage Festival, there was still hope of stabilising infection numbers.

Abdool Karrim spoke to TimesLIVE on Monday after growing concerns that a series of parties across Ballito and Durban mimicked superspreader events. The 2020 Ballito Rage Festival kicked off on November 27, with dozens of clubs from Ballito to Durban hosting events.

Still hope to prevent Rage-based second wave, but only if contract...

Superspreaders: Despite warnings, festival and matric party go ahead in Western Cape

Despite strong warnings that a Covid-19 resurgence was under way and that large gatherings should be avoided, pockets of people in the Western Cape ignored these and contributed to the uptick in infection numbers.

Anton Bredell, minister of local government, environmental affairs and development planning, confirmed on Monday that several parties had been held in the Garden Route and the Central Karoo. These included a “Cooler Box Festival in Ladismith in the Central Karoo” and a private matric party in Knysna. Both have led to “multiple infections”.

Superspreaders: Despite warnings, festival and matric party go ahead...

@alanwinde and @DavidMaynier at @capetownint where the premier has a covid test done in the isolation room by the National Health Laboratory Services
and they also checked if the airport are ready for the additional volume of passengers. @TimesLIVE @BDliveSA @Airports_ZA pic.twitter.com/h0w2YW5FPZ

Hungary will maintain restrictions, including a 17:00pm curfew, to curb the spread of coronavirus infections until at least January 11, Prime Minister Viktor Orban said on Monday.

Orban also said in a Facebook video that New Year's Eve celebrations will not be held this year.

Hungary imposed a partial lockdown, including a closure of secondary schools, universities and restaurants, on November 11 as Covid-19 cases and deaths surged to their highest levels since the start of the pandemic.

Traditional Indian wedding finery gave way to hazmat suits and masks in a remote north Indian village, after the bride tested positive for the coronavirus just hours before her marriage, a local health official said.

The couple, whose names were not made public, decided to go ahead with the ceremony on Sunday in the courtyard of the Covid quarantine centre in Baran in the western state of Rajasthan - their protective gear giving it an otherworldly feel.

Under a bright red canopy and in front of the holy fire, the bride and groom exchanged garlands wearing matching blue hazmat suits, visors and face masks.

India is accelerating its review of coronavirus vaccines developed by Pfizer Inc and AstraZeneca for emergency use, a senior government official said on Monday, as the world's second-most affected country struggles to contain the outbreak.

The Indian government is pinning its hopes for mass supply of the vaccine on Serum Institute of India, the world's largest vaccine producer by volume, which on Monday lodged the first formal application for emergency use approval for AstraZeneca Plc's Covid-19 vaccine.

Pfizer Inc had already applied for emergency use approval for its vaccine in India over the weekend, the official said, declining to be identified.

Prince William and his wife Kate arrived in Edinburgh on Monday at the start of a nationwide train tour of Britain to meet and thank frontline workers, care home staff and teachers for their efforts during the Covid-19 pandemic.

William, Queen Elizabeth's grandson and second-in-line to the throne, and Kate are travelling 1,250 miles (about 2,000km) across England, Scotland and Wales on board the Royal Train as part of their three-day trip.

They kicked off the tour at London's Euston Station on Sunday evening where they were serenaded by Welsh pop star Shakin' Stevens singing his 1980s hit "Merry Christmas Everyone" before leaving for Scotland.

The organisers of Rage Festivals say all events planned for 2020 and 2021 have been postponed until further notice after a Covid-19 superspreading event at Ballito in KwaZulu-Natal.

“For now, all further Rage Festival events have been postponed until further notice as we consult with relevant officials and stakeholders.

“We are devastated that despite all efforts before and during the festival and at all Rage-controlled venues, some attendees still contracted Covid-19. “We are complying fully with all authorities and stakeholders and will continue to do so,” said the event organisers' spokesperson Darren Sandras.

Patrons at three taverns in Motherwell in Nelson Mandela Bay ignored Covid-19 regulations at the weekend, potentially putting hundreds of people at risk of infection.

Motherwell is considered a Covid-19 hotspot but throngs of revellers — most not wearing masks and not socially distancing — packed the three taverns on Saturday night.

One tavern was fined R3,000 for selling alcohol and operating after the new curfew, which runs from 10pm to 4am.

Police pounce on Eastern Cape taverns not complying with Covid-19...

Scores of drunk drivers arrested, shebeens and liquor outlets shut at the weekend

Scores of people were arrested for drunk driving and several shebeens and liquor outlets were shut down during an operation at the weekend, Gauteng police said on Monday.

Police spokesperson Capt Mavela Masondo said more than 200 suspects were arrested and illegal liquor outlets were closed during a safer festive season operation in Soweto at the weekend.

At a roadblock around Soweto, more than 20 people were arrested for drunk driving. Officers also recovered illegal liquor, unlicensed firearms and ammunition.

The recent deaths from Covid-19 in Kenya of a refugee, a member of parliament and a retired civil servant all happened for the same reason: emergency help was hours away.

Yet the new coronavirus is spreading into rural areas where the public health system is creaking and scarce ICU units are full and turning patients away, medics round the nation told Reuters.

South Korean President Moon Jae-in called on Monday for expanded coronavirus testing and more thorough tracing as the country struggled to control its latest and largest wave of infections.

The Korea Disease Control and Prevention Agency reported 615 new coronavirus cases as of midnight Sunday, capping a month of triple-digit daily increases that have led to 8,311 confirmed patients in quarantine, the most ever.

Moon ordered the government to mobilize every available resource to track infections, and to expand testing by deploying the military and more people from the public service, presidential Blue House spokesman Chung Man-ho told a briefing.

A sizeable minority of people believe conspiracy theories about the coronavirus and Covid-19 vaccines, some experts have warned, just as countries prepare to launch mass inoculations to get the pandemic under control.

Britain begins its vaccine programme this week and others are likely to follow soon, so governments are seeking to reassure people of vaccines' safety and efficacy in order to get a critical mass to take them.

In the US, President-elect Joe Biden said he would have a coronavirus vaccine publicly to demonstrate its safety, and referred to people losing faith in the vaccine's ability to work.

The 76-year-old former New York mayor is the latest in a long string of people close to the White House, including Trump himself, sickened in a pandemic that has killed more than 280,000 Americans.

"@RudyGiuliani, by far the greatest mayor in the history of NYC, and who has been working tirelessly exposing the most corrupt election (by far!) in the history of the USA, has tested positive for the China Virus,” Trump said, using a term for Covid-19 that has drawn backlash.

President-elect Joe Biden has made his selections for two key public health positions, sources said on Sunday, as he prepares to take office next month as the coronavirus pandemic rages to new levels across the US.

The former vice-president is also expected to nominate Rochelle Walensky, chief of infectious diseases at Massachusetts General Hospital, to run the US Centers for Disease Control and Prevention, a person familiar with the decision said.

Cumulative cases now total 9.68 million, the second-highest tally in the world after the United States.

But health officials are drawing some encouragement that daily readings have stayed below the 50,000 mark for a month, inspite of a busy festival season that saw crowded markets and busy streets.

The number of confirmed coronavirus cases in Germany increased by 12,332 to 1,183,655, data from the Robert Koch Institute (RKI) for infectious diseases showed on Monday.

SARS-CoV-2 antibody surveys can be used to more accurately estimate how many people in the country have been infected with the virus that causes Covid-19. A few such surveys are under way in SA.

In Gauteng, a survey which started three weeks ago and is to be completed by the end of the month, has gathered data from just under 3,000 people. In total the survey aims to test 14,000 people from 7,000 households.

Cyril puts hotspot Bay in the dry dock, but initiation season will go ahead