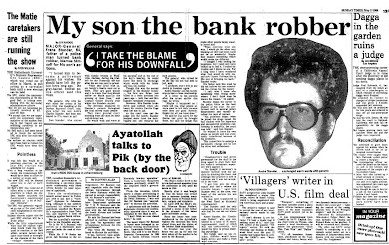 We delve into the truth behind Andre Stander and his gang of accomplices.
Image: TimesLIVE

In the 1980s, the news-starved South African public became enthralled by the story of a police captain who had undertaken a bank robbing spree in his spare time.

As we look back at this case, though, it becomes clear that many important issues were left unaddressed, perhaps even purposefully hidden to maintain the shine of the hottest news story of the time.

In episode 49 of True Crime South Africa, we delve into the truth behind Andre Stander and his gang of accomplices.

'It was about the thrills,' says Allan Heyl, sole surviving member of the Stander gang of bank robbers

'We had it all, good food, fun and good sex'
Opinion & Analysis
3 years ago

On September 19 1994, the quiet Port Elizabeth suburb of Mount Pleasant was rocked by the brutal slaying of a 13-year-old girl.
News
1 year ago