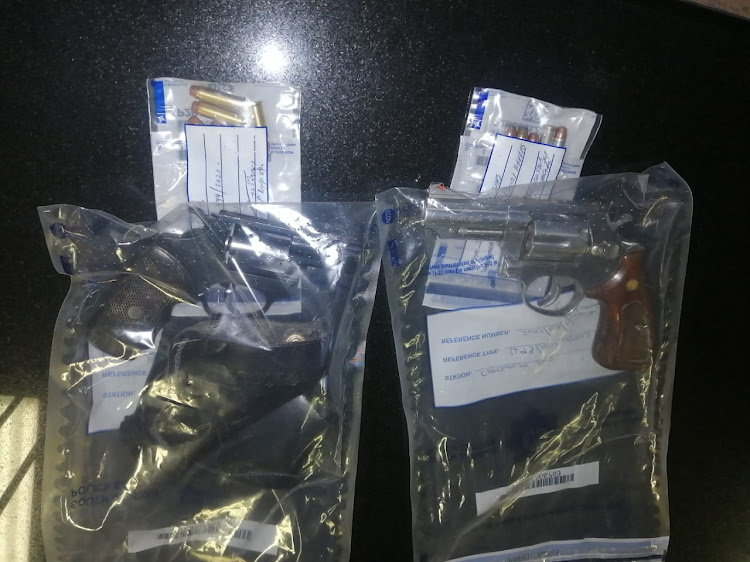 Police spokesperson Col Thembeka Mbele said members of a task team from Chatsworth police station together with Durban metro police acted swiftly on information of “random shootings” in Taurus Street in the Durban suburb of Shallcross.

Braving a hostile environment where even strongly reinforced police contingents have come under attack from community members, the officers rushed to the area where the shooting was taking place and kept observation before closing in on their targets.

“Further investigations revealed that the serial numbers on both revolvers were erased,” said Mbele.

The suspects are expected to appear at the Chatsworth magistrate's court soon.

“The acting provincial commissioner, Maj-Gen Thulani Gonya, praised the task team for acting swiftly resulting in the arrests of the suspects,” said Mbele.

“Police will not tolerate any lawlessness in the community. Police will arrest perpetrators who commit criminal acts and place them before the criminal justice system,” she said.

She said the firearms would be sent for ballistic testing to establish if they were used in the commission of any other offence.

Taurus Street became a horror scene on January 4 when two suspected hitmen, escaping from Pillay’s home after allegedly executing him, were shot, stoned, beheaded, dismembered, and set on fire by community and gang members as children watched.

Sunday Times reported that police came under fire as they attempted to get to the scene which played out in broad daylight.

In another report, the Sunday Times said that a massive police operation aided by 20 police vehicles and a police helicopter attempted a raid on Pillay’s Shallcross home in January 2019 but members were attacked by the community and stoned, leading to a police R5 assault rifle being stolen from the officers.

Police minister Bheki Cele criticised police management over the lack of action taken against Pillay and his cohorts as Pillay, who according to police management was a known drug kingpin, had never been convicted of any crime.

“I still have a question that I raise with the police, that if this guy was known to be a gangster and a drug dealer why was he still out there? This is what the community and all of us are calling for: don't deal with these small fish, don't deal with the men on the street, deal with the real guys,” Cele was quoted by the Sunday Times as saying after Pillay’s murder.

A clandestine operation by a number of specialised policing units led to the discovery of drugs worth more than R100,000 near the home of slain ...
News
1 year ago

Teddy Mafia to be buried in R300,000 funeral with 'diamond-studded' casket and high security

Suspected Durban drug kingpin Yaganathan Pillay, commonly known as Teddy Mafia, will be buried in a casket studded with fake diamonds at a funeral ...
News
1 year ago

A 52-year-old man was shot dead in an execution-style hit near the home of slain alleged drug kingpin Yaganathan Pillay, known as Teddy Mafia, on ...
News
10 months ago

The police continue to crack down on operations linked to alleged drug kingpin Yaganathan Pillay, known as Teddy Mafia, almost three months after his ...
News
10 months ago