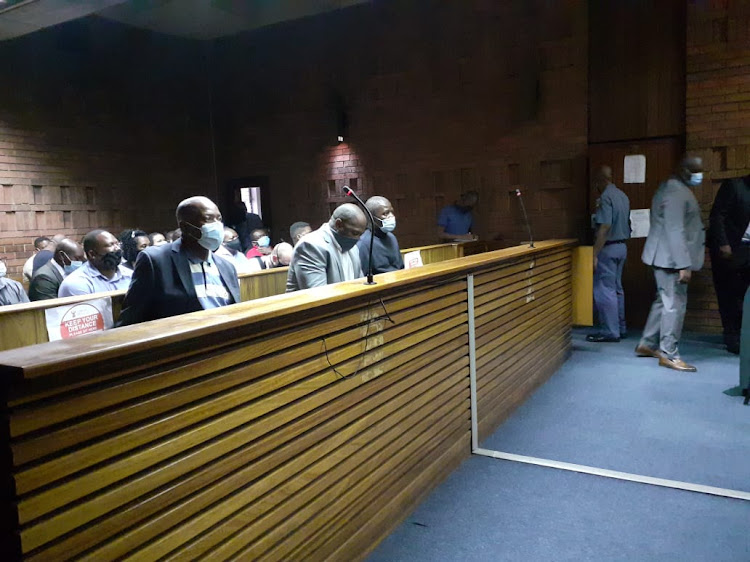 The three accused in the Pretoria magistrate's court on April 1 2021.
Image: Shonisani Tshikalange

Mpumalanga’s acting National Prosecuting Authority (NPA) head, a top provincial official and a Hawks commander accused of corruption were granted bail of R20,000 each on Thursday.

The three allegedly colluded to bribe a senior state advocate in the organised crime unit of the office of the Gauteng director of public prosecutions, Andrew Mphaga, to withdraw charges faced by Masange for contravening the Immigration Act and fraud.

Masange was detained by home affairs officials and subsequently arrested by the police in 2020 for allegedly being in the country illegally and using fraudulent documents which earned him a top position in the department.

The state opposed the granting of bail, saying the trio would intimidate witnesses and tamper with evidence.

“The court has no evidence before it of any violence committed by the applicants and that the broader public is in danger,” said magistrate Dreyer van der Merwe.

The NPA's acting head in Mpumalanga allegedly handed over a boxed 18-year-old bottle of whisky to a prosecutor to make a case go away.
News
1 year ago

On the suggestion they would interfere in the investigation against them, the magistrate said: “The evidence is that they are on suspension and are not working in the criminal justice system, which makes it almost impossible for them to interfere.”

He said the three were considered to be innocent until proven guilty. The bail conditions bar them from having direct or indirect contact with officials working on the case.

It is alleged that on March 23 Luphondo handed Mphaga a boxed 18-year-old bottle of Glenfiddich whisky worth R1,550. Inside the box was R5,000 in cash. Luphondo allegedly said there was more cash to come.

The state further alleges that on March 27, Plaatje telephoned Mphaga and asked to meet him at an off-ramp at Fountains where R28,000 in cash was handed to the advocate.

During the bail application, state prosecutor advocate Molatlhwa Mashuga said the investigation was incomplete and would last about five months.

Mashuga said if released on bail, it was likely Masange would try to influence or intimidate witnesses and conceal or destroy evidence.

“The case against the applicants is strong. There is direct evidence of the commission of the offences, evidence obtained through an undercover operation, video evidence, audio evidence and executive statements,” he said.

The Public Servants Association of SA has lashed out at the department of home affairs for suspending a senior bureaucrat involved in investigating ...
News
1 year ago

Luphondo, who was arrested on March 30, said in an affidavit the state’s case against him was weak. “I am totally innocent and I intend to plead not guilty,” he said.

Luphondo said if he remained in custody until trial, his detention would have a punitive and devastating effect. “Such detention will in all probability result in substantial loss of my respect in the community,” he said.

Luphondo’s lawyer Kamesh Maharaj said his client had been served with a suspension letter.

Plaatje denied the allegations levelled against him. “During our official interaction with Mphaga, I never directly or indirectly asked him to act improperly or do Masange any favour,” he said.

He said Mphaga has advised him the state’s case was weak.

The case was postponed to July 23.

This follows a decision by council that the mayor discusses with him the implications of continuing to draw a salary while he is barred from ...
Politics
1 year ago

Madonsela on combating corruption: ‘It is the greatest violation of social justice’

The former public protector said corruption not only creates an uneven playing field but also steals resources.
News
1 year ago