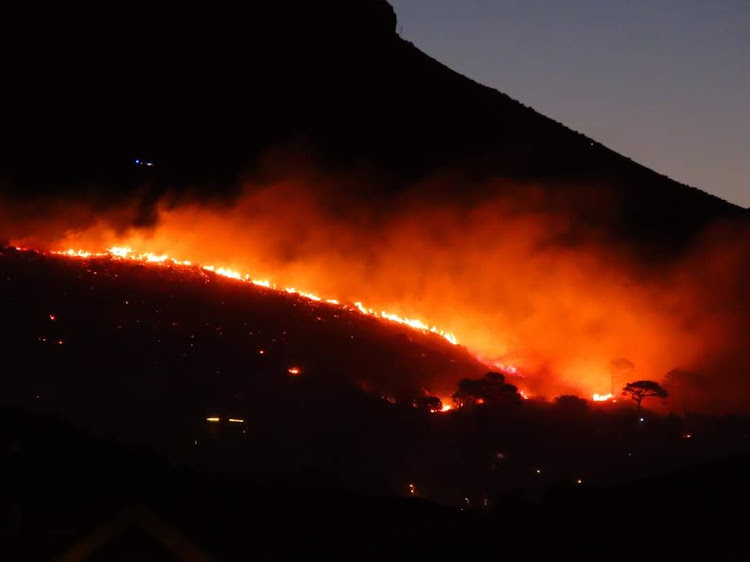 Lisette Lombard shared a video on Twitter after she was caught up in the fire raging through Cape Town.
Image: John Wilson/ twitter

A hiker in Cape Town managed to “outrun” the Table Mountain fires on Sunday.

Lisette Lombard shared a video of herself on Twitter after she found herself caught up in the fire raging through the city.

Lombard said she was trail running on the mountain when she noticed the fire was spreading fast and heading her way.

She said her car was destroyed by the fire but she was thankful to be alive.

“My car has been destroyed in the fire with other vehicles and the restaurant, but thank God we are safe. Never have I experienced a fire that spread so unpredictably fast. I have so much respect for our firefighters,” said Lombard.

I think my Car has been destroyed as I cannot reach Rhodes Memorial and think I managed to outrun the fire -can anyone tell me if the cars at Rhodes Memorial are safe and where do I need to run to get away from the fire? Newlands Forest? @wo_fire @cptfrs #fire #CapeTown pic.twitter.com/d0xICuvupS

Firefighters trying to put out the fire above the M3 near Rhodes Memorial. Thank you @cptfrs @wo_fire I’m trail-running on the mountain, but worried my car may be caught in the fire if it reaches Rhodes Memorial; so am heading down because it’s spreading fast heading my way #fire pic.twitter.com/gIbCMHhw4f

My car has been destroyed in the fire with other vehicles and the restaurant, but thank God we are safe 🙏 Never have I experienced a fire that spread so unpredictably fast. I have so much respect for our firefighters 🙏🏼👏🏼 Thank you 😭 #capetown #fireforce @wo_fire @cptfrs pic.twitter.com/MK6iEGgENy

The raging fires destroyed the University of Cape Town’s (UCT) Jagger Library and Mostert’s Mill among other heritage sites.

Speaking to TimesLIVE, the city’s fire and rescue spokesperson Jermaine Carelse said the department was alerted about the fire on Sunday morning.

“At about 8.45am the city’s fire and rescue service was alerted to a vegetation fire above Philip Kgosana Drive. Fire crews were immediately dispatched to the scene, with the fire spreading from Rhodes Memorial towards UCT, ” he said.

UCT announced it has suspended all academic activities until further notice and affected students have been moved to emergency accommodation and provided with food.

“No classes, tutorials, laboratory work or tests will take place on Monday or Tuesday. We will assess the situation and provide further updates before midday on Tuesday,” said the university’s vice-chancellor Prof Mamokgethi Phakeng.

SANParks manages Table Mountain National Park and it thanked scores of community members for donating food, water, energy drinks and other necessities for those affected by the fires.

“SANParks appreciates the gestures and support from Capetonians in this difficult time.

“This is not an easy fire which will probably see firefighters fighting the blaze for at least three days. All the help received will go a long way for the firefighters.”

Cape Town's City Bowl residents are on high alert on Monday morning as strong winds fan the fires that ignited on Sunday.
News
9 months ago

Two firefighters have been hospitalised for burns after a runaway blaze which engulfed the Rhodes Memorial restaurant and parts of the University of ...
News
9 months ago

Cape Town residents, corporates, politicians and organisations have rallied to help thousands of UCT students and citizens affected by the fire that ...
News
9 months ago