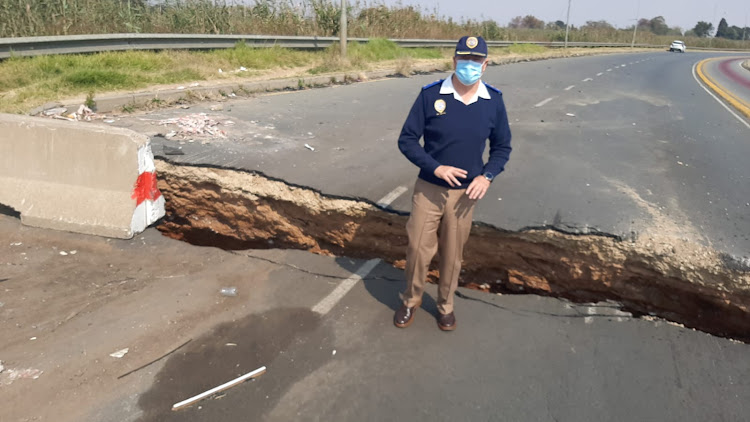 The Johannesburg Roads Agency (JRA) has devised alternative routes for Soweto motorists while it repairs the damage caused by a sinkhole.

“Following collapsed stormwater infrastructure which caused a section of the road to cave in”, the agency said on Tuesday it needed to close an additional lane on Klipspruit Valley Road southbound and opposite Maponya Toyota.

“Last week the JRA implemented a sectional closure on two traffic lanes. However, after further assessment, an additional lane was closed off as a precautionary measure. Plans for repairs are under way and will be communicated in due course.”

All traffic lanes southbound are affected by the closure.

“Motorists are urged to exercise caution by driving at a reduced speed and maintaining a safe following distance,” said the JRA.

“Traffic officials will continue to assist with the traffic flow and monitoring at peak times.”

⚠️ T1, T2 and T3 bus routes have been diverted to Orlando East due to the road damage at Klipspruit and the schedule will be delayed by 15 minutes. We apologise for the incovenience. ^BM pic.twitter.com/LvCb93TBa0

⚠️ALERT : Heavy traffic in most parts of Soweto this evening. @ReaVayaBus es are still being diverted via Orlando East due to the #SinkHole on Klipspruit Valley Road.#Crash on the Soweto Hwy towards Orlando #JHBTraffic pic.twitter.com/SrzHIMnEil

Collapsing infrastructure and heavy downpours have led to the closure of two major roads.
News
1 year ago

Driver ‘saved his son’, then he escaped as SUV was swallowed by sinkhole

The man whose SUV was photographed protruding from a sinkhole last weekend “saved” his nine-year-old son after the road suddenly collapsed, leaving ...
News
1 year ago

Heavy rain and stormwater lead to road collapse in Mpumalanga

A road battered by heavy rain and stormwater has collapsed outside Mbombela in Mpumalanga.
News
1 year ago